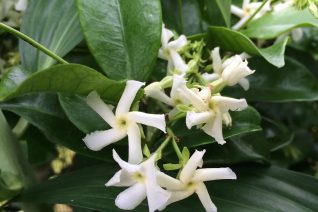 Reputed to be a hardier form of Star Jasmine, we really haven’t witnessed that. It seems just as hardy as the commonly grown clone. But it has several important differences. The large deep green leaves are conspicuously convex and thick. In June to September it alights with tons of ivory colored sweetly fragrant pinwheel shaped flowers. These are slightly smaller but come in such fragrant abundance that it doesn’t seem to matter. Evergreen from the base to the top which is nice. No bare knees. Full sun to quite a bit of shade in rich, well drained soil. Summer water speeds both growth and early establishment. Then light regular summer water. Moderate deer resistance. Twining to 15′ provide support. Fences, pergolas. 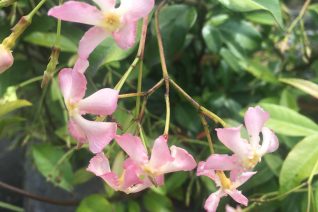 Exciting color variant of star jasmine. Soft pink propeller shaped flowers yield the same sweet perfume. Blooms June-August and prefers part shade and protection from hot sun. The intensity of pink in the flowers is more pronounced in cooler conditions. Strongly twining evergreen vine with deep green, glossy, undulate (wavy) leaves which are handsome year round. To 10′ tall and 4′ wide in 5 years. Good cold hardiness. Provide strong support. Water heavily after planting and for the first summer. This will speed both establishment and growth and lengthen the bloom season. If it never bloomed (and the flowers are beautiful and fragrant) it would be a top notch evergreen vine on those merits. Excellent recent introduction. See video below (img 6053). Just below the main picture. A really great vine. 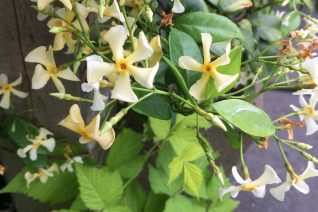 The apricot hued flowers of this Star Jasmine species are not the only difference in this elegant evergreen vine. The fragrance is different too with much more of a balmy citrus scent. Vigorous twining vine for part shade. Provide sturdy support. Very cold hardy and permanent. To 14′ tall and 8′ wide on trellis. Possible to use it as a small scale ground cover. Tolerates full sun but with some leaf discoloration. Regular summer water in well drained soil. Occasionally at the end of the season this species will form twin bean seed pods which are showy as well. Blooms earlier than Star Jasmine and finishes later as well. Evergreen foliage is light yellow green- lighter than other species of Star Jasmine.  Moderate deer resistance. 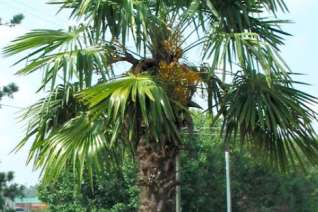 A classic palm in the PNW. Windmill Palm or Trachys as they are also known are extremely popular. And they should be. Moderately fast growing palm to about 18′ tall in 10 years. The trunk is covered in fur and this acts almost like insulation to protect the interior meristem from cold. Very cold hardy to near short dips to 0ºF- many venerable and ancient Windmill Palms can be found in old neighborhoods having gone through the very worst winters of the last 50 or more years. The fronds usually have drooping filifers on the species but that can vary. Male and female and requires one of each for viable fruit set. Following huge aromatic cream colored flower structures pollinated berries drop and will often germinate in open ground. Full sun to full shade. Drought tolerant but regular irrigation in rich soil will speed growth. Excellent performance in tight spaces. Occasionally young palms become nitrogen starved and turn yellowish. To correct simply feed with all organic fertilizer and mulch and water well through summer. 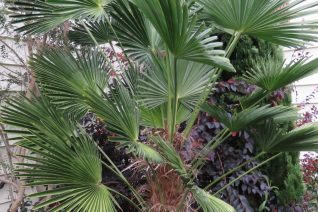 Waggies! Our fave hardy palm at Xera. The fronds on this slower growing tree are stiff and tidy and have none of the drooping filaments on the branch tips that the species T. fortunei possesses. To 12′ tall in 7 years. A very clean and tidy looking palm with a distinct asian look. The fronds are even finely outlined in white hairs…more definition for this stately plant. Grows about 2′-3′ a year if well watered. You really can’t water Trachycarpus too much in the ground, it just makes them grow faster. Same wooly trunk as the species. Waggies are recommended for windy cold areas as they are not affected by those conditions. Fantastic cold hardiness not suffering damage until temps dip below about 5ºF.  This is a great palm for colder gardens and tolerates quite a bit of shade. Always looks it’s clean best. 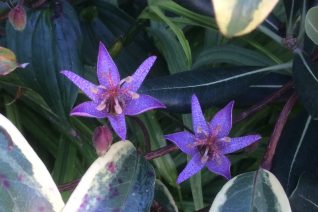 Excellent Toad Lily that delights us with a long long season of orchid-like flowers that glow a smooth blue. To 2′ tall and forming an increasing clump the ends of the stems produce flowers from August well into autumn- often into November if there is not an intervening freeze. The wavy leaves that line the stems hold spots that appear like small drops of dark oil. Very pretty. Part shade to shade in rich, moisture retentive soil. Excellent woodland performer. This variety as the other we grow (‘Spotted Toad’) seem to avoid a scorch that can afflict the leaves of many varieties. Don’t know why. We just got lucky. Pair with Japanese forest grass and Hosta. Easy, long lived perennial. Completely winter deciduous. 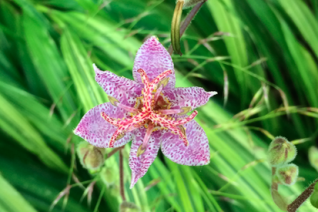 Toad lilies are the joy of late summer into autumn in the shade garden. This tall growing selection has leaves that are conspicuously spotted with maroon dots. In August to October 20″ stems support multiple orchid-like flowers. The flowers have three petals heavily marked with purple/blue dots. Very pretty. Surprisingly its a nice cut flower. Forms a spreading clump in time. Rich, moisture retentive soil in part shade to shade. It has the nice habit of winding through other plants and the cheery exotic flowers will show up quite far from the source. Very easy long lived perennial. Regular summer water. Avoid hot sun which will scorch the leaves. Completely deciduous in winter. Adapts to dry shade when established. 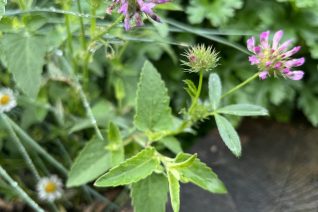 Tomcat clover is one of our showiest native clover species. A tough hardy annual that is found from about Salem to Newport south to California. Its a common component of waste places and dry rocky environs. In poor soil it is a somewhat meager plant with just a little fertility its a completely different animal. To 12″ tall but usually half that this sparse but showy clover beckons pollinators when its pink to red and white delicate looking flowers that  erupt into bloom in May-July. Very easy to grow in containers with other native annuals. This shares the fecund trait of other clovers and it will already have shed seed by the time you see it in bloom. Excellent forage for native bees- and purported to supply a tangy taste to Tomcat Clover Honey. Water plants from containers to establish, self sown plants get by on natural rainfall alone. Leave the plant well past bloom to shed the following years crop. Give it open disturbed spaces to self sow. The leaves are very much like a clover but the leaflets are a lot thinner. Also found on dry stream banks and with native clumping grasses. Full all day sun.  Oregon native plant. 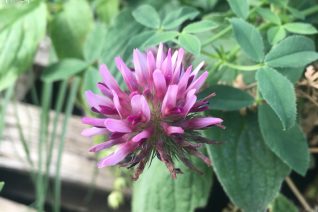 Springbank Clover. Fascinating perennial clover that was once widespread in wet areas of the Willamette Valley and is now found in restricted sites there but is much more prevalent on the coast and east of the Cascades.  A pretty spreading spring wildflower with heads of brilliant magenta/purple flowers. Mainly in spring but also in summer if wet. To 4″ tall it can be up to 2′ wide in favorable conditions. Though mostly restricted to seeps and wet areas now it once made life under native white oaks and there indigenous people would use it as a food source. The creeping green stems root where they touch the ground. Stems were harvested and steamed as a vegetable and they replanted as they harvested the remaining stems ensuring another crop. Not a long lived perennial 3-5 years but it sets copious seed. Wet sites in moisture retentive soil. Mainly riparian in habitat.  It can dry considerably in summer and still thrive. But regular water is what it wants. Fun plant to grow that has lost a LOT of its native range. In habitat it is best seen on the wet cliffs adjacent to the beach. Great pollinator plant. Easily overwhelmed by invasive exotics.   Oregon native plant. 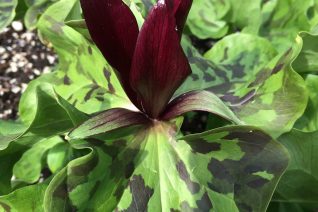 One of Oregon’s greatest wildflowers. This native of the Siskiyous and the SW part of the state makes an outstanding garden plant. Ours are divisions from well marked leaves and flowers with a deep maroon/black hue. To 18″ tall in bloom it responds readily to rich, humus filled soil with regular summer water. In very dry conditions it will go happily summer dormant. And it usually does anyway by the end of the hot season. The black and green leaves are dramatic but a  great collar to the tall upright dark flowers. Blooms appear in Portland in April/May and last for weeks. Part shade to shade- avoid blasting hot sun- it will grow in sun but go dormant very quickly. Roots very deep into the ground- difficult to move once established so pick its home carefully. Multiplies into a substantial patch with good care. One of our favorite native wildflowers. Limited quantities. Oregon native plant.