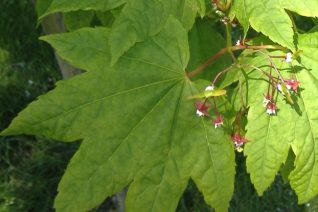 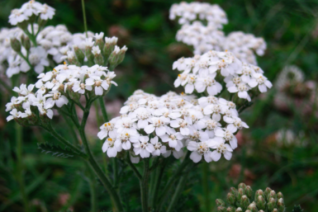 This is the locally native form of our wild yarrow. A rambunctious, easy to grow evergreen perennial for rough sites in well drained soil in full sun. Continuously from spring to autumn ‘umbels’ of pure white flowers rise 18″ above low spreading aromatic, finely divided ferny foliage. Most often it is green with variants that have gray foliage from time to time. Low water perennial that can even be used as a lawn substitute. A single plant spreads to several feet wide. Moderate deer resistance.  Butterflies oh the butterflies.This is a pioneer perennial and will often out compete less robust native perennials. Its best use is as a contained weed. It is great for pollinators Individual plants rarely persist more than 3 years.  Oregon native plant. 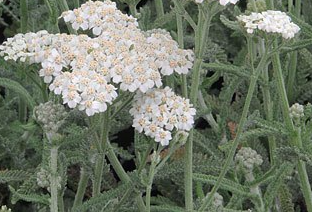 A fine form of our native Yarrow that has leaves that are a striking gray with pure, clean white flowers. A great combination. Spreads to form a low wide plant that is evergreen (gray). The flat clusters of flowers appear continuously from May to frost. More consistently if you remove spent flowers. The umbels, unusual for the daisy family, are loved by butterflies. Well, actually all pollinators. They are given a flat landing pad and tons of flowers- what more could you want. Excellent for low care areas where this romping perennial will happily out compete weeds and hold ground with very light amounts of water. Full sun and well drained soil. its best to double dig the soil to incorporate oxygen and de-compact the soil. Does not like compacted soil. Light but consistent summer water speeds growth and vigor. Otherwise very drought tolerant. Excellent on slopes. To 20″ tall in bloom on a low spreading foliage plant to 2′ wide or wider. High deer resistance. Great cut flower. Mix with other low water plants. Pretty with other colors of yarrow. Oregon native plant. 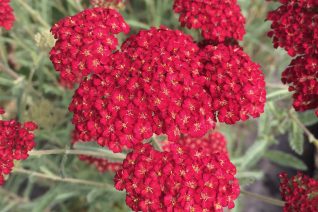 Of all the selections of our native yarrow this stands out for many reasons. The ‘umbels’ of flowers are a rich red which holds the color for an extended period. It fades only slightly to a rust red with time. Its vigorous and easy to grow. And it re-blooms reliably if spent flowers are removed. All the way until frost and sometimes longer. A very, very good long-lasting cut flower. To 18″ tall forming spreading colonies. Semi-evergreen. Low water when established in well-drained soils. Excellent to moderate deer resistance. Appreciates an annual application of compost.  Oregon native plant. 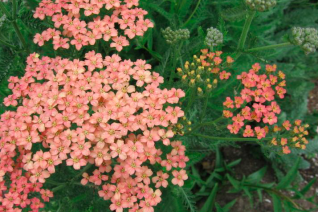 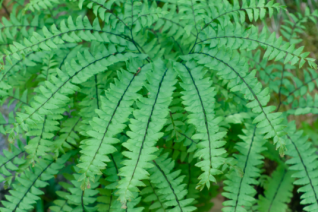 Western Maiden Hair Fern is native from the Aleutian Islands in Alaska south mainly through shady wet spots in the west south as far as Chiahuahua, Mexico. Its even locally native from Maryland to New Foundland. Its a long lived and vigorous fully deciduous perennial for perpetually wet sites. To 2′ tall and spreading almost indefinitely where conditions suite it. Heavy clay soil that retains consistent moisture in part shade to shade. Often found lining water falls in Oregon or in deep cool moist gullies. The multi fingered leaves are a soft green and are held erect on jet black stems. Very good sited at the bottom of a downspout. Very easy to grow given consistent moisture.  Oregon native plant. 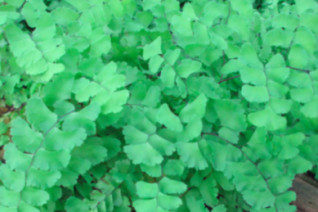 Cool hybrid between two California native maidenhair ferns that we love because its EVERGREEN! Finely divided soft green leaflets surprise as they sail through the toughest winter with little or no damage. A clumping variety that slowly increases over time in rich, moisture-retentive soil in part shade to shade. Adores moisture but can go much drier than most maidenhairs. To 10″ tall and as wide – then increasing. Lovely thing that works in woodlands to containers. Excellent naturally-occurring hybrid that deserves a place in our gardens. Moderate deer resistance. 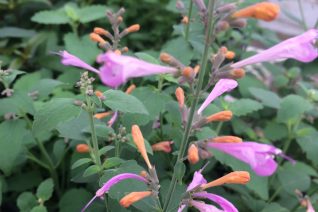 Cool bicolored Hummingbird Mint that has masses of flowers that appear from orange buds which quickly change to luminous light lavender when open. To 20″ tall and forming a clump this very, very, long blooming perennial is delightful for hummingbirds, bees and butterflies. A soft pastel coloration that pairs wonderfully with light yellow flowers and even blue. Great in seasonal containers. Blooms non-stop from June to October. Do not remove flower spikes as new flowers will appear continuously from the same spike. Rich, WELL DRAINED soil with light, consistent summer water. Its best to water Agastaches consistently during their first year in the ground- to establish a large root system. Ideal on slopes- to assist in drainage in winter. Double dig soil to incorporate lots of oxygen in the soil.  One of our favorite introductions. An amazing combination of flower colors on a single plant. Do not cut back until new growth has flushed out in spring and all threat of a hard freeze has passed. 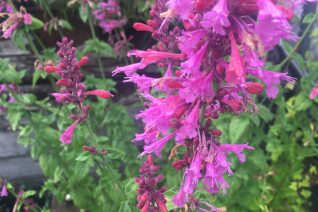 We believe this to be a cross inheriting some of the coloration of A. auranticus as well as A. cana. To 28″ tall this clump forming, everblooming perennial brings bright red buds that open to purple flowers. The colorful combination lasts all summer into autumn. New flowers are born on the same spikes so do not remove. Moderate consistent water through the first summer to establish. Double dig soil to incorporate oxygen into the soil and aid in irrigation to the roots. Established plants get by with a little less. Loved by hummers and  pretty decent cutfower as well. Full all day sun for best performance, will not be quite as floriferous in part shade. Sweetly scented foliage is an extra benefit. To 18″ wide and slowly increasing. Excellent on berms as well as slopes. Mulch in fall.  Small rosette of winter foliage is protected by the previous years defunct stems. Prune these away after all threat of a hard freeze has passed. 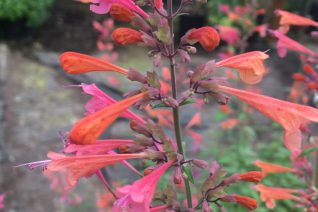 One of our all-time best introductions ‘Electric Punch’ is a floral powerhouse of a hummingbird mint with exceptional adaptation to our cold and wet winters. Rising to 34″ tall in bloom, a clump can become enormous in rich, WELL DRAINED soil with light, consistent summer water. Also, accepts no water but with interruptions in bloom. Incorporate plenty of oxygen into the soil and slopes are ideal. Do not remove flower spikes during the season- new orange aging to pink flowers appear from the same inflorescence. Best to wait until spring to cut back the previous seasons defunct stems. Moderate deer resistance.