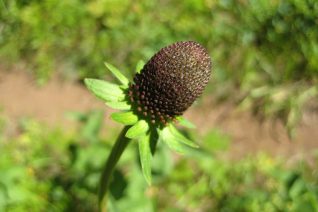 Our native coneflower found in the Cascades. Look! It forgot the petals. Yup thats our boy. Clump forming tall perennial for moist sunny sites. Rich, soil with ample humus. Easy to grow in a perennial border where you can take advantage of the austere look of the flowers, when they come en masse at the end of 30″ stems they are something to behold. Very good cut flower and it goes with a very modern aesthetic. Full sun. Completely deciduous in winter. Oregon Native Plant. 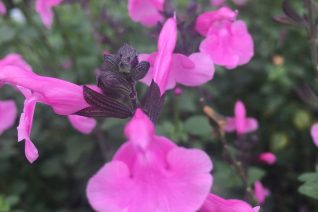 This species has yielded some very good cold and wet tolerant cultivars. This selection from Monterey Bay Nursery in Watsonville, CA has proved to be one of the best performers. Masses of outward facing candy pink flowers swarm the stems of this large, semi-woody Salvia. The flowers begin in May and continue unabated to frost. This is a very good hue of pink, very mixeable with other colors without clashing. To 2′ tall x 2′ wide in a single season. Well drained soil of rich to average fertility. Double dig the soil before planting to incorporate oxygen and improve drainage as well as water permeability. It excels on slopes in full all day sun with just light summer water. Flowers continue through the hottest weather- good trait in our climate where many others take a break in in the mid to upper 90’s. Drought adapted when established. Do not cut back until new growth emerges in spring- then it can be taken back by 2/3rd. New growth will erupt from semi-woody stems around the base and you are up and running. Herbaceous below about 15ºF. Returns from the base if established. Hummers, butterflies, chicks without bras dancing around like nymphs. Its got it all. Moderate deer resistance. 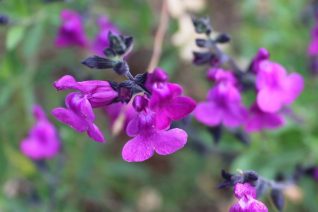 This purple flowered royal sage has impressed us for years with its hardiness to cold, true purple flowers and tolerance of cold winter wet. A loose spreading perennial that adorns its tips with royal purple flower from June to frost. Never dense it prefers full hot sun and very well drained soils and light but consistent summer water. To 18″ tall by 2′ wide in time. Do not cut back until new growth pushes in spring. It needs a woody framework of branches to protect the overwintering crown. Takes blasting hot conditions. Moderate deer resistance. Very long blooming perennial that doesn’t flinch at heat and drought. The royal purple flowers are held in black calyxes. Excellent on slopes. Some wonderful companions are Epilobium (Zauschneria) septentrionalis ‘Select Mattole’ and Cuphea cyanea ‘hirtella’. Long lived perennial. 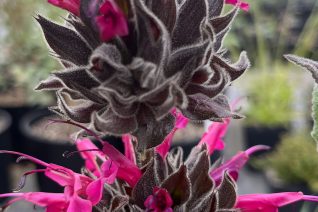 This Californian Sage is extraordinarily vigorous and spreads by underground runners to colonize large areas. That is if winter does not knock it back. Large quilted soft green arrow shaped leaves appear in early spring, by late spring 28″ tall chalice’s of rich red/pink (Raspberry) flowers erupt from dramatic and well spaced whorls. Rich to average soil that drains well. Water well in the first season to establish then very light to none in subsequent years. A Salvia of southern and central California  it has a distinctive aroma that is loved by some, despised by others. Mulch with dry leaves for the first winter or two. Doesn’t like wet plus subfreezing cold. Good, and restrained in a container. Protect containerized plants from extreme cold (below 20ºF). Nice and very dramatic cut flowers. Blooms March repeatedly until June. Great for hummingbirds, butterflies, and pollinators. Semi-deciduous in winter. 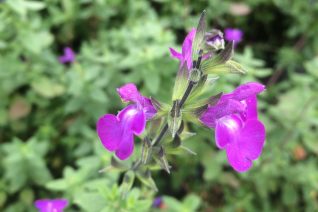 Very good Salvia that blooms non-stop medium purple flowers for months in summer well into autumn. Tall growing to 3′ and somewhat wispy. A possible hybrid with the blue flowered Salvia chamaedryoides. Hummingbirds love this free blooming hardy perennial. Freezes to the ground below the mid 20’s. Returns from the base in spring. Rich, WELL DRAINED soil in full sun. Drainage in winter is the key. Add some pumice and gravel to the planting hole and water consistently to this plant good and established. Do not cut back in the spring until you actually see new growth pushing. Then remove all the dead material. Regains stature quickly in spring. 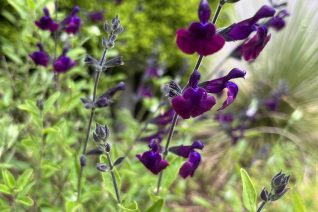 Exquisite hybrid Salvia that forms a semi-woody subshrub and is clad in velvety purple with reddish toned flowers for months. To 2′ x 2′ forming a bush. The opulent flower color pairs well with almost any hue. Its especially commanding near yellow or chartreuse. Full sun to very light shade in rich soil that drains. Add all purpose fertilizer to the hole and keep it very well watered throughout its first summer. Do NOT cut it back until new growth shows in spring. Then you will know what to remove. The woody structure of the previous years growth actually acts as an insulator during the winter- this is why we recommend not trimming it until all danger of frost has passed. Excellent container subject and irresistible to hummingbirds. Aromatic foliage. Harbors some deer resistance. Remove spent flowers to encourage more. This and many Salvias takes a break from blooming when the temperature is above 95ºF. It will quickly resume blooming when cooler weather arrives. 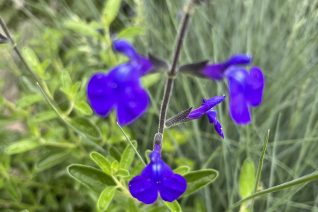 This is one of the best flower colors that we’ve encountered in a Salvia in quite a while. Always on the lookout for blue flowered Salvias this beautiful sage fits the bill. Upright growing semi-woody Salvia that produces a non-stop supply of sky/ to periwinkle blue flowers. The spires of flowers rise to about 20″ tall forming a rounded sub-shrub as wide. Flowers begin in May. Long blooming perennial for hot, sunny spots. This Salvia would benefit from the added heat of reflected walls and sidewalks. Great near the curb in rich soil with regular water in summer. Flowers take a break in extreme heat but as soon as a cool down they begin again in earnest. Cut back hard in spring AFTER all danger of frost has past (mid-April) and no sooner. Excellent in containers as well. Easy, bloomy, lovely blue. Hummingbird favorite as well as a butterfly magnet.  A xera favorite. Moderate deer resistance. 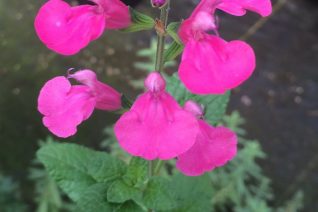 This species of semi-woody Salvia has produced some of the best for our climate. Shocking pink, relatively large flowers decorate the upward stems of this vigorous and long blooming perennial. To 26″ tall and forming a semi-woody shrub. In essence it is a subshrub which is woody with time but capable of freezing to the ground and returning from the base. The vivid flowers appear from May to frost and are a delight for pollinators, hummingbirds and pink-o-philes. Full, hot sun in a warm position in rich, WELL DRAINED SOIL. Double dig the soil before planting to incorporate oxygen and make it easier for water to reach the roots. Do not prune back in spring until you see new growth. Either from the tips or the base depending on how cold the previous winter. Cut back hard then and it will zoom back to its former stature in no time. Hot sunny places, hell strips, containers. Excellent on hot slopes. 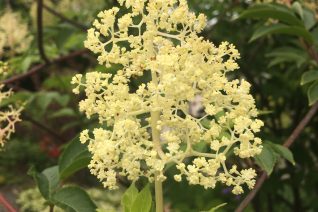 Our locally native blue elderberry makes a good very large shrub or small garden tree. It has beautiful pinnate foliage, large fragrant umbels of white flowers followed by large clumps of edible blue fruit.These appear in May/June quite a bit later than the red druped species S. racemosa.  Incredibly fast growing in youth it responds in a robust way to extra water in summer. Adaptable to nearly any soil type. And very drought tolerant as it matures. Fall color is often yellow but also lacking. Birds feast on the berries through winter. Otherwise they hang ornamentally on the bare twigs- also very showy. To 14′-18′ tall and naturally forming a vase shape. Lifespan is typically less than 30 years. Give it room to spread. Edible real fruit set occurs in more well established plants. Widespread throughout the west. Spreads liberally by bird droppings.  Oregon native plant. 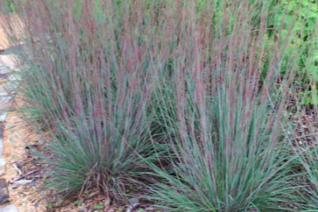 A fantastic grass that performs wonderfully well in our climate. A clumping grass with very upright blue foliage. In summer inflorescences rise above the leaves with fine fluffy whitish flowers- provides a dramatic hazy effect. In autumn the 28″ tall grass becomes a whole other color palette. Deep raspberry and purple with tints of red before going over to all all reddish orange. An excellent color trip not the way to dormancy. When dormant it remains a presence and looks nice through winter. Cut down to the ground in late winter/early spring to make way for fresh new foliage. Not evergreen. Average to enriched well drained soil with light summer water. Established plants in reasonably good soil will sale through summer drought with no ill effects. Clumps expand over time to 2′ wide. Full sun. Easy grass. May self sow in open disturbed soil.