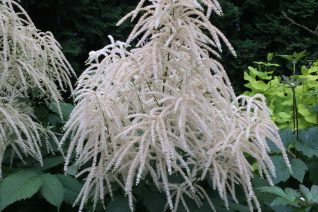 Goats Beard is a big bold and easy to grow perennial for part shade and perpetually wet sites. To 4′ tall and as wide with large fountains of pure white flowers in late spring to early summer. Native in seeps and along watercourses, mimic those conditions in your garden and you’ll have success. Long lived plant that develops a woody base. Completely winter deciduous. Excellent combined with other mesic water loving plants. Tolerates some inundation but not during the growing season. Often found on cliffs away from the browse of deer. Very large permanent perennial in time.  Fall color is often yellow. Widespread in the PNW. Oregon native plant. 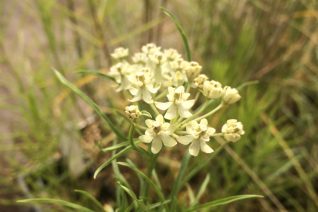 Native Oregonian butterfly weed that has a great wildflower demeanor and is just as attractive to pollinators as well as Lepidoptera (butterflies). Full sun and well drained soil, though it accepts clay soil on slopes that are strictly unwatered in summer. To 22″ tall and making a clump in time. Mix with fine textured ornamental grasses, tall spiky perennials. Light summer water. Flower color is most often creamy white but ranges to light pink. Often seen on road cuts and in ditches in the Willamette Valley. Blends in with grasses and other plants but pollinators find it no matter what. Nice cutflower. Important food source for Fendler’s Blue Butterfly which is very endangered and locally indigenous. Winter deciduous. Oregon native plant. 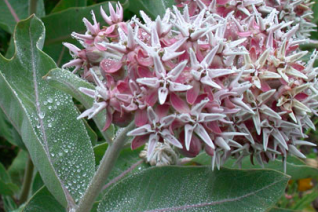 This widespread species is native to the floor of the Willamette Valley and is locally common in the Columbia Gorge. and occupies dry rocky hillsides in full sun but tolerates heavy clay soil. In the best conditions (loam) it is huge spreading perennial that requires pre-planning and some real estate. Gray green stalks and leaves rise up to about 4’tall and bear deliciously fragrant pink orbicular flowers. These are irresistible to butterflies, including Monarchs, and if you want one to visit your garden this plant is good insurance. However, all butterflies find it irresistible. Spreads underground vigorously by stolons and can come up quite a way from the initial clump. Full sun and well drained soil. Completely winter deciduous and emerges relatively late in spring. Be patient. Oregon native plant. 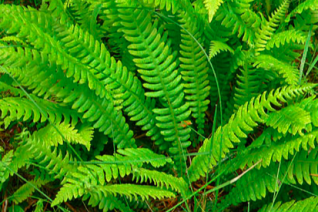 The second most common fern in western Oregon Deer fern is a lovely native evergreen clumping perennial that is invaluable.  The tiered upright and then settling to horizontal mid green glossy fronds are handsome all the time. To 2′ wide and 2′ tall (when fronds are emerging). Rich, moisture retentive soil high in organic matter. Light summer water in part shade to shade. Familiar fern of the Oregon Cascades but very widespread. High deer resistance. Excellent native fern for life between Rhododendrons and Pieris that are ancient. This fern loves part shade and cool moist soils but has a bit of drought adaptation as well. Its supremely adapted to to the rough life of competition. Useful plant that looks very good year round.  Design by Vanessa Gardner Nagel Seasons Design. Oregon native plant. 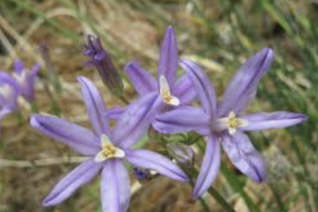 Wonderful native bulb that has several common names. Harvest lily is one as well as cluster lily. This gorgeous inhabitant of dry hillsides from British Columbia to southern California erupts in clusters of blue flowers just as summer drought ensues. To 14″ tall but normally shorter a clump of scrappy green leaves comes out in autumn and persists until bloom time. As the leaves go dormant the bulb sends up its bloom. Easy to grow if you accept its requirements. Bulbs that are potted should be watered after planting but established plants should rely only on what falls from the sky. Best to not irrigate in summer. In time it spreads by both increasing bulblets as well as seed. Excellent planted among Festuca roemeri var. roemeri  as well as Festuca californica where it occurs naturally. Excellent pollinator bulb in the lily family. Leaves are deer resistant but flowers are not reliably deer proof. Full hot, all day sun in soils that dry completely in summer. Native throughout the Willamette Valley and into the gorge locally. Oregon native plant. 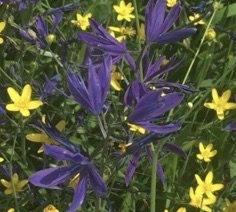 Common Camas one of the wests great wild flowers.  ‘Maxima’ is the form that is most common in the Willamette Valley. In April to June meadows, glens, and floodplains turn sky blue. Occurs natively in vernally wet sites, that means that part of the winter it is submerged or very saturated. However, it does thrive in upland situations in heavy clay soils that are sodden for at least half the year. Prior to European development first nation people relied on this starchy bulb as a food source. They managed it by low intensity fires which cleared away the competition but did not injure the deep bulb. In turn the Camas thrived. They ate it baked or steamed like a small potato. An important pollinator plant that also attracts some critically endangered Willamette Valley butterflies. Nice cut flower.  The spike of flowers opens at the base and moves to the top. To 20″ tall in bloom. The whole plant goes quickly dormant with summer heat. Leaves emerge in early spring and precede the flowers. Full sun. Common associated plants are Ranunculus occidentalis and Hosackia gracilis.  Oregon native plant. 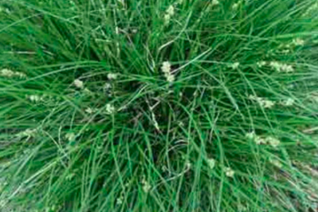 Foothill Sedge is commonly found from the central Willamette Valley south into California. A tightly clumping sedge with medium green foliage and 8″ wiry stems with attending flowers that are tan in spring/summer. In our region this plant can be found in upland situations where it is moist for at least half the year. Its also diminutive and almost hard to find in the wild. Under cultivation its an entirely different beast. Clumps are dense but expand with a pronounced weeping habit. To 8″ tall x 18″ wide for each individual plant. Good massed or as a lawn substitute. Takes mowing if its limited to once a year. Regular irrigation keeps it green and happy. Summer drought sees blades of tan as well as green and not so verdant. It does not run nor become a seeding pest- sticking surprisingly to itself. Plant on 1′ centers for a modern, mounding effect. Takes clay soils well. Water regularly to establish the first summer then taper off (continue watering if you want it to stay staunchly green).  Combines well with perennials including native perennials such as  Checkermallow (Sidalcea) and, Ranunculus occidentalis (Western Buttercup), as well as Shooting Stars (Dodecatheon) are found in closely related communities with this plant. Full sun to light shade, or high overhead shade. In California it is also known as Berkeley Sedge.  Oregon native plant. 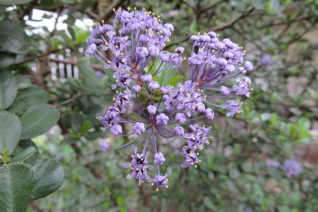 For cold gardens this is an excellent cultivar and its a version of a species native to the Willamette Valley south into California. Small green wedge shaped evergreen leaves on an arching, somewhat angular shrub. In April and May clouds of soft violet blue flowers swarm the whole shrub. Beautiful. To 7′ x 7′ very quickly in poor to average well drained sites. No summer water once established. Handsome at all times. Excellently adapted to rough urban life where compacted soils, reflected heat and little water is present in summer- thrives in all those conditions. Full sun. Easy. Surveys by the California Chaparral Institute report that this is the most common component shrub of that community in both California and Oregon. Fixes nitrogen with its roots and is common following disturbance. Classic west coast shrub.  Excellent accompanied  by native bulbs and annuals. Beautiful with Pacific Coast Iris. Oregon native plant. 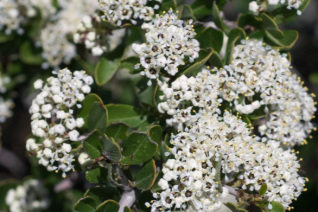 This is a Willamette Valley  native form of Buckbrush found in the SW part of the Valley. This species is found historically from the Portland/Oregon City area in the Willamette Valley and  throughout the southern half of the state well into California. It has lost large areas of its northernmost natural range to development and fire suppression. It is a fire adapted species that requires disturbance to distribute. Thats a pity because this is a fantastic native shrub for hot dry sites. It is now employed by ODOT for freeway plantings and we are happy to see that. A large, angular evergreen shrub with small deep green paddle shaped leaves. In April the whole shrub is swarmed with pure white flowers.This is a beacon to all pollinators and the sweetly fragrant flowers will literally be buzzing in bloom.  Fast growing incredibly tough shrub for areas of intense drought and reflected heat. To 8′ x 8′ very quickly in any soil that does not become boggy. Excellent performance in tough urban situations. Irresistible to bees and butterflies. Associated plants in the wild are Rubus ursinus, Dodecatheon hendersonii. ,Extremely cold hardy to below 0ºF. No summer water. Moderate deer resistance. Oregon native plant. 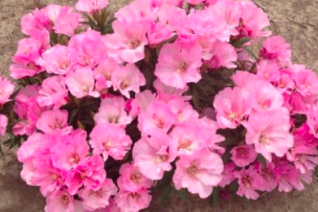 Farewell-to-spring is a common wildflower of meadows and glens in Western Oregon. It gets its name because it is often the last wildflower to bloom before the summer drought ends the show. This form differs by its pure pink profuse flowers on a dwarf plant. (The wild form is lavender with a red blotch in the center of each petal.). An amazing display of bloom that appears as if someone dropped a bouquet on the ground. You see no evidence of leaves when its in full fettle. Blooms June to October in a garden setting with regular summer water and rich soil and the gardeners diligence removing spent flowers. Reseeds in open disturbed soil.  to 10″ tall and a little wider forming a dome. Nice cut flower. Fun variation on a native. Very attractive to native pollinators. True hardy annual. Oregon native plant.