The most widespread native Ceanothus in our region. Its known by two common names, red stem Ceanothus which is fairly self explanartory and Oregon tea. A large growing shrub to small tree with conspicuous sanguine stems clad in large mid green leaves, this completely deciduous shrub is not known for fall color making due with yellow and off green before abandoning the plant. Fast growing to 12′ tall in May-July depending on elevation frothy white, fragrant flowers loosely decorate this sparse plant. In full sun and with regular irrigation it achieves tree-like status quickly. In the shade it makes rounded twiggy plant that is much less graceful. A wonderful native for pollinators and birds. Pollinators relish the flowers and birds make off with the black and brown seeds. Very graceful when well grown and that means average soil and water to establish then none in subsequent years. Excellent bordering woods and thickets. Naturally occurring with Frangula (Rhamnus) purshiana and Rosa nutkatensis var. nutkatensis. Tolerates more summer water than most Ceanothus but none is necessary. Not deer resistant.  Native in the Portland city limits. Oregon native plant.

Farewell-to-spring is a common wildflower of meadows and glens in Western Oregon. It gets its name because it is often the last wildflower to bloom before the summer drought ends the show. This form differs by its pure pink profuse flowers on a dwarf plant. (The wild form is lavender with a red blotch in the center of each petal.). An amazing display of bloom that appears as if someone dropped a bouquet on the ground. You see no evidence of leaves when its in full fettle. Blooms June to October in a garden setting with regular summer water and rich soil and the gardeners diligence removing spent flowers. Reseeds in open disturbed soil.  to 10″ tall and a little wider forming a dome. Nice cut flower. Fun variation on a native. Very attractive to native pollinators. True hardy annual. Oregon native plant. 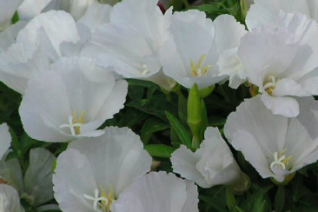 Excellent little selection of our locally native wildflower ‘Farewell to Spring’. To just 10″ tall this plant(s) become a solid dome of white flowers from May-August. Cute little cut flower. Full sun in rich, to average well drained soil with just light competition from other plants. Re-seeds reliably in open disturbed sites. A great native derivative for hell strips and even containers. Regular summer water – or it will shut down go dormant and think its time to set seed and then make its melon. Rough areas, cut flower. Oregon native plant. 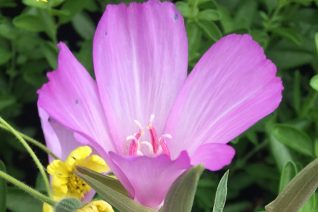 Farewell to Spring is so called because it is one of the last conspicuous native wildflowers to bloom before the onset of summer drought. And bloom it does  all the way to late August. Its seen in mass populations waving above the already sear grass on hillsides that dot the valley. Little water is needed but a little supplemental water and removing spent flowers will extend the show.  Otherwise it will die upon setting seed. The 2′ tall stems support multiple luminous pink cup shaped flowers. They appear superficially like a poppy. This is the variety that is locally native in the Portland area. The distinctly lavender pink flowers fade to a lighter interior near the center. But it will also appear with a darker pink/red blotch in the center of each petal on a minority of seedlings.  These assist in guiding pollinators and this plant is a prime source for all native bees and butterflies. Excellent cut flower that lasts for quite a while in a vase. This is the source species of all the fancy cultivars that are raised in the cut flower trade. Reseeds happily in open disturbed sites. Excellent plant for wild areas and is often employed on road cuts and freeway embankments in deliberately sown wild flower mixtures. I’ve noticed that this local subspecies re-sows itself annually where other subspecies and especially the showy florist varieties are shy to do so. If you want a robust, climate adapted wildflower then go with this subspecies. It comes back strong. Probably our showiest and longest blooming native annual.  Reseeds- leave stems to dry and disperse seed and remember to leave open spaces for next years show. Wonderful with yellow Madia elegans for a months long display of brilliant native annuals. A Xera favorite plant. See video below (IMG) taken at the William Finley Wildlife Refuge just south of Corvallis.  Oregon native plant. 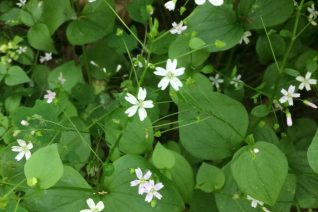 Lovely ubiquitous woodland flower that brings waves of glorious airy stars for weeks in late spring to mid summer. Occasionally pink the flowers most often are white. Handsome somewhat bold foliage provides a plant that is more than suited to competition on the forest floor. Often self sows and this is welcome. Plant containerized plants in spring and water faithfully through the first summer- but never boggy. Then it is yours. Let it romp among ferns, Hosta, Japanese Forest Grass for a sparkling NATIVE treat. Mix with other natives such as Vancouveria and deer fern. Very easy to grow. Blooms for a very long time and longer if we have a cool beginning to summer. AKA Candy flower. To 10″ x 10″ on average. Summer deciduous and emerges early in spring. Not bothered by pests. Forms spreading colonies in rich, humus enriched soil in part shade to shade. Locally native in the Portland city limits.  Oregon native plant. 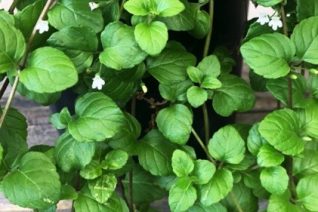 Yerba buena is a fine trailing herb native to southeast Alaska south into northern California. Its a common scrambling component of  woods and forest margins. The round slightly scalloped leaves emit a sweet herb/mint fragrance that reminds me of childhood and they line trailing stems. This 4″ tall by 2′ wide perennial is commonly found among shrubs and clumping grasses as well as perennials. It can be found in the wild with such plants as Vancouveria hexandra (Inside out flower) and Whipplea modesta (Whipple Vine). In late spring to early summer barely conspicuous tiny white snapdragon flowers appear in the leaf axils. Evergreen. Often the  leaves turn maroon red in cold weather. The sturdy semi-woody stems root where they attach to the ground and it may be used as a deer resistant small scale ground cover for stabilizing smaller scale slopes. This member of the mint family can be used to flavor iced tea or any cold drink. Shade to part shade in average to slightly enriched soil. Combines well with clumping grasses and smaller scale shrubs such as Symphoricarpos (Snow Berry). Good in containers as well. Yerba buena (the good herb). Excellent native pollinator perennial in the mint family.  Oregon native plant.

Native annuals often get over looked in our gardens. They occupied vast stretches of the Willamette Valley and civilization has caused those displays to suffer. In our gardens they are precious reminders that we should include every category of native plant. Giant Blue Eyed Mary is one of our most delicate looking and stunning in floral detail,  It makes a hazy cloud of beautiful blue and white small snapdragon flowers from late April to Mid June. A true annual that dies once the floral display is done. But leave the skeletons of the plant for several weeks longer to form and shed seeds for next years display. This 20″ tall grassy plant occupies open sunny sites as well as the margins of forests. In our gardens it appreciates open slightly disturbed soil. Seedlings germinate in autumn and over winter as small plants. They will heavily occupy an area about the size of a 9″ pie.  Excellent plant to succeed mid and late spring bulbs. Water lightly after planting and  to establish then none required. Native to the Portland city limits as well. Fantastic displays of this plant can be seen at Camassia in West Linn all through late spring. This is a very reliable re-seeder if you give it some open ground and check for slugs. Seedlings germinate quickly following the first rains and are incredibly cold hardy and drought tolerant. Don’t worry, they are from here, they know what to do. Attracts a wide variety of native pollinators including a wealth of smaller hover flies.  Oregon native plant. 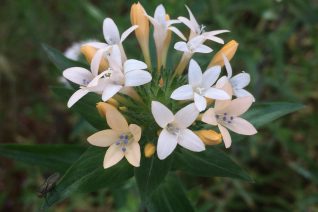 Wild Phlox is a native hardy annual that occurs from the prairies of the Willamette Valley to the sage brush country east of the Cascades. Clusters of flowers open sherbet orange and then fade to white with conspicuous blue pollen for a multi colored effect. Adaptable plant that will occupy any open disturbed site. Reseeds prolifically. To 2′ tall. Cute cut flower. Nice native to let wander your garden. Low water. Locally native in the city of Portland and to our nursery site in Sherwood. A charming plant that should be given average conditions and not pampered- otherwise it will contract powdery mildew which is harmless but kind of ugly. The unique, nearly indescribable color of this flower certainly is not. Oregon native plant. 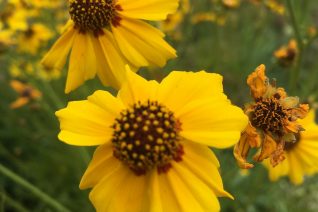 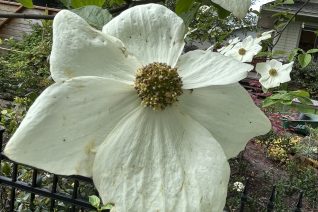 Pacific Dogwood is one of our most beloved native flowering trees. From BC south to the Sierra  Nevada of California this understory to margin tree alights in April and May in pristine white flowers. They perch on upward arching stems for a perfect display. This large conical shaped tree can achieve 35′ in great age. Water deeply and infrequently during its first summer in the ground, once it is firmly established it can go with natural rainfall. In full hot sun more irrigation may be needed. Native to the Portland city limits and a firm spring decoration on our freeways. Pacific dogwood contrasts wonderfully in bloom with deep green conifers. Average growth when young is 2′-3′ per year. In certain seedlings this spectacular species may re-bloom in August/September.  Its a fairly small percentage but when it occurs its a refreshing display at the end of hot summer. Fall color is pink/red/orange and is conspicuous in the understory. Full sun to overhead  shade in the understory. In autumn red fruits decorate the branch tips and are food for birds. Give this native tree good air circulation and mulch after planting. Oregon native plant.