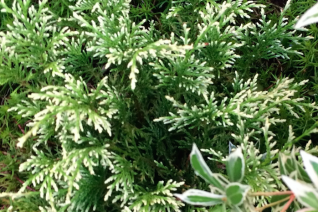 Always on the lookout for dwarf conifers that really are dwarf and that are easy to grow with a minimum amount of water. This little gem does just that. Forming a spreading and arching shape- much like an anvil, the new growth on this slow grower is tipped in white. It remains showy throughout the year. To 2′ x 3′ in 10 years. Full sun to light shade in any soil. Light summer water to none when established. Adaptable to dry shade conditions as long as the shade is not too deep. Excellent, easy to grow small evergreen. Fits in the smallest gardens. Great in containers, especially winter containers. 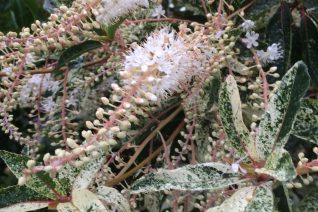 Variegated form of Japanese summer sweet with amazing white splashed foliage and masses of powerfully fragrant white flowers all summer. To 10′ tall moderately fast in part shade to full sun in rich, moisture retentive soil. Regular summer water. In time it forms a trunk that displays mottled exfoliating bark which is very pretty. . Wonderful woodland tree that endures full sun with regular irrigation. Light yellow fall color. Graceful at all times. Nice branching pattern in symmetrical whorls. The clusters of flowers dry and cling to the tree in winter. These can be removed by the fastidious gardener or left to hang and decompose with the effect of spanish moss.  Blooms continuously most of the summer. The clusters of pendant white flowers emit an intoxicating perfume that is most notable on warm to hot days. It will perfume the entire garden- its not a cloying sweetness either but a much more sophisticated aroma that has you seeking more. Water regularly, not drought adapted. Lovely, lovely specimen tree. Avoid hot dry sites. 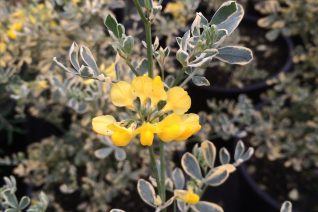 Demure winter blooming shrub that produces whorls of pea shaped flowers from January to March and sporadically through the rest of the year. The divided leaves are edged in cream making a great backdrop to the soft yellow fragrant flowers. Open lax habit to 3′ tall and 4′ wide for a protected location in full sun to light shade. Great winter container plant and thrives in conservatories where it will bloom non stop. Well drained soil  with light summer water. Site out of subfreezing winds- a west or south aspect. 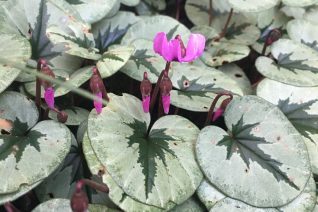 Winter Cyclamen is a fantastic adaptable bulb that will form impressive colonies in time. The fabulous leaves are marked with silver and deep green designs. This form is known as the ‘Christmas Tree’ for its shape on the rounded leaves. From January to March small nodding purple/pink flowers form groups in concert with the foliage. A tonic for winter. To just 4″ tall in bloom and each corm gets bigger and bigger as years pass. Ants spread the seeds far and wide and new plants appear quite a distance a way. If you begin with a fancy leaved variety chances are most of your seedlings will mimic the parent. Part shade to shade in rich, well drained soil. Goes dormant and can tolerate completely dry conditions in summer. Excellent companion for winter Crocus, Hellebores, Snow drops. 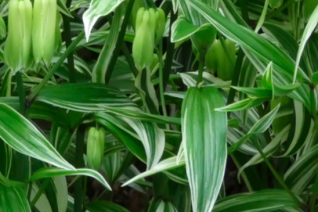 Shade plays by its own rules and to be honest flowers are often pretty modest. Therefore we rely on foliage to brighten dark corners and add texture and contrast. This elegant perennial is 18″ tall and arching stems have large opposite leaves delicately feathered in white. In spring small white bells droop gracefully along the stem. Deep, rich, hummus rich woodland soils that retain moisture. Regular summer water. Winter deciduous. 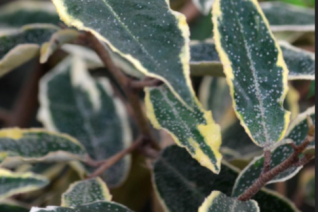 Fantastic compact and variegated Eleagnus that is also very stable and not prone to leaf reversion- many variegated cultivars revert rather easily to all green.  To just 6′ x 6′ and dense in 6 years each olive green leaf is margined in light yellow. In autumn small off white pendant flowers are intensely fragrant. They occur on older growth- prune in late fall after flowering has ended.  Slow growing and a good scale for small gardens. Full sun to quite a bit of shade. Striking evergreen that is easy to grow, cold hardy and long lived. Light summer water once established but endures no water summer drought conditions.  Avoid boggy sites. Easy, beautiful, cold tolerant shrub. Long lived. 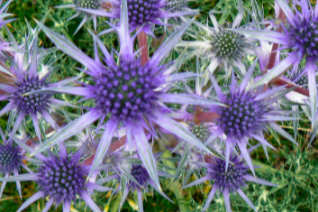 Very blue, oh so blue shorter Sea Holly that has pretty unusual leaves as well as stunning flowers. Crinkly sage green leaves are prickly and outlined in fine white. From this batch of foliage the flowering spike attains about 20″ inches before producing the metallic sky blue star shaped flowers. Very pretty and it will instantly draw pollinators. Remains in bloom for 4-6 weeks from early to mid summer. Full sun, rich, well drained soil and little summer water when established. Tough but pretty perennial that is very long lived. Increases in width each year to 2′ wide. Excellent candidate for the hellstrip, the front of the border or gravel gardens. High deer resistance. Completely deciduous in winter. 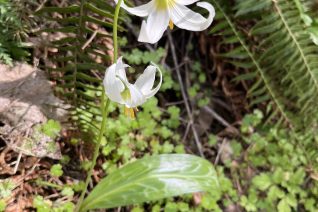 Oregon fawn lily is widespread in the western third of the state. In late winter and early spring leaves arrive mottled like a spring fawn. Soon the flowers arrive  on straight stems and yield a cream colored umbrella of petals. They reflex around a yellow center with protruding stamens. This glorious little plant is perfectly adapted to our climate. By mothers day it has set seed and gone back to sleep. Flowers are single on average plants or in poorer soil. In rich soil it soars to 20″ tall and can have a spike with two flowers. Gorgeous ephemeral plant that requires a dry rest period in summer.  Competes well with invasives and in time it will seed itself to form patches. Seedlings of this bulb take approximately 2-3 years to bloom. Water to establish potted plants. Once established, only the rain that falls from the sky. Full sun to full shade in average soils, including clay soils. Do not water in summer or it will rot and die. In the wild its found under Oaks where it competes on the forest floor with Lonicera hispidula and other forbs. Blooms from early April to early May in the Willamette Valley- later at higher elevations. A wonderful native plant that should grace every garden. Found in the wild with Dodecatheon hendersonii, Nemophila menziesii var. atomaria, Carex tumulicola, Festuca roemeri var. roemeri and Festuca californica. Occurs on upland soils, never boggy. Extremely well adapted to our soils and climate. Wonderful woodland bulb. Best in part shade to shade, where the flowers last longer.  Oregon native plant. 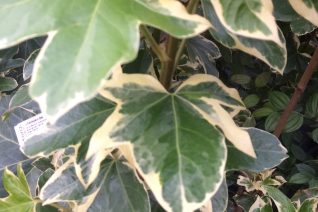 Bold sprawling shrub or vine that is a hybrid between Hedera and Fatsia. This form has large leaves outlined in cream. Evergreen that seeks shade but is surprisingly sun tolerant too. It may be grown as a free standing shrub, bold ground cover, or trained as a vine. Very nice in winter containers too. Well drained soil  average to rich fertility. Light water. White flowers in autumn never set viable fruit. To 4′ tall and sprawling 8′ wide. Moderate deer resistance. 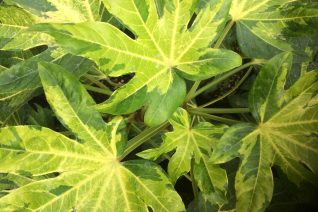 Fatsias are invaluable in our climate for their tropical good looks, and overall hardiness. They endure dry shade with aplomb and in autumn they explode into exotic bloom with large stems supporting orbicular white flowers. This cultivar has leaves with an interior zone of yellow. Slower growing than the species it will eventually top out at 6′ x 6′ in full to part shade in rich well drained soil. Light summer water. Moderate deer resistance. Cold hardy and very easy to grow. Light consistent summer water speeds growth.