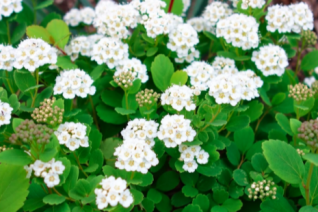 Underused native Spiraea from the western United States and native in Oregon including the immediate Portland area.  Low mounding deciduous shrub to 2′ x 3′. This is the locally native form. Often the straight species is for sale- its from Asia and is 4 times the size of ours. Pink buds open to foamy white flat clusters of flowers appear in late spring. In autumn it turns amazingly vivid colors of red/orange/gold and it holds its color for weeks. One of the most drought tolerant of the genus requiring light summer water to very little. Full sun and rich soil. Spreads to form patches. Locally native and plentiful near the Columbia Gorge and throughout the mountains whose diminutive habit means that pruning is seldom necessary. Blooms on wood from the previous season. Long lived and an excellent landscape shrub. Birch Leaf Spiraea or glossy leaved Spiraea. Native in the Portland city limits. Oregon native plant.