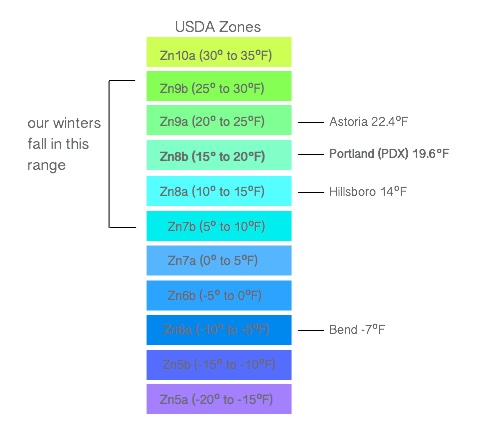 Most gardeners are familiar with the USDA cold hardiness zones.  It refers to the average annual low temperature over a thirty year period which can dictate plant suitability.  At PDX where the official Portland reporting station resides that is an average from 1990 to 2020.  Officially that puts Portland in USDA Zone 9a (20º to 25ºF) with an average lowest temperature of 21.3ºF. Of course there are winters colder and warmer than that and that is why one simple temperature does not tell the whole story.

USDA zones are based on official reporting stations. The averages are totaled and compiled and assigned isothermal lines on a map to distinguish  the zones.  Broadly zones are a good overall place for gardeners to start but the devil is in the details and as with all averages there are years when the temperature drops far below the norm- this is normal and to be expected but averages smooth over time and you miss the real nuance of the weather. And the Portland Metro area has quite a few distinct microclimates. So, the best representation of hardiness takes into account the inevitable colder years. For instance, on average we expect a below normal winter about every three years. These arctic events send not only the low temperatures plunging but often highs will fail to reach freezing. This does not allow the plant to recover from overnight lows and adds further stress to the plant. So, I factor below freezing high temperatures in as well. Duration of a freeze is also paramount. One night dipping to arctic lows is much less consequential than multiple nights. Our most extreme stretches of arctic cold can last 4 or more days.

In the Portland area and especially in the NE and eastern portions of town the Columbia River Gorge terminates east of the city. It is the source of strong winds that almost always accompany arctic air. Arctic air is incredibly dry and this adds stress to plants that can’t take up water from frozen soil. The plant loses moisture but cannot replace it. A combination of freezing and wind desiccation  can cause considerable damage. Broad leaved evergreens are most often at risk. I’ve estimated that you can lose more than one zone of hardiness at least from a subfreezing wind event. I factor subfreezing wind into the hardiness as well.

Soil and water are added to the equation

Another factor is soil and soil moisture during an arctic event. Plants from drier climates than our own do not often have saturated soils when arctic air arrives. This does several things. Many plants that would be hardier to much colder temperatures cannot deal with frozen wet soil and saturated frozen conditions and the expansion of ice. Agaves are an example of plants that are hardier the drier and more well drained the soil. In drier climates they can handle much colder temperatures than we ever experience. Saturated soils decrease the hardiness of many plants including many perennials.

The final temperature perameter in assigning cold hardiness is summer heat. Many plants from hot climates also endure cold winter temperatures. The heat of summer actually increases the plants ability to survive cold by ripening the wood. A good example of this is Loropetalum (Fringeflower). In our warmer summer climate it receives the minimum amount of heating calories to survive our coldest lows. In Seattle, with distinctly cooler summers Loropetalum usually fails in the first cold winter. This ability to accumulate carbohydrates linked to cold hardiness is less conspicuous but important for quite a few plants.  So, hardiness of a plant is not only built in as a static number but all of these parameters considered give you a good idea of real cold tolerance. That having been said, topsy turvy weather, early and late freezes can complicate cold tolerance too. I give the ratings in 5 degree increments. That gives a broad enough range to factor in sheltered microclimates as well as soil suitability. I have observed the majority of our plants through the coldest weather and these large freezes provide the most useful ground truth- usually a watershed of important information. Finally, the more established a plant is the hardier it will be to cold. If you are iffy on a plants hardiness in your garden give it the LONGEST possible growing season before winter- plant early.

A distinct wet and dry season

We have what is called a winter wet/summer dry climate. That is we have a distinct wet and a distinct dry season.  Usually beginning in June there is an intrusion of high pressure from the southwestern US that expands and extends up over the PNW. The storm track that is aimed at our shores from October to May weakens and is deflected to the north.  Though some light and sporadic rain may occur in summer it is NEVER enough to actually hydrate the soil and hot summer temperatures evaporate moisture from the soil very quickly. There is a net loss of moisture from the landscape. Gardening here I can honestly say in the past 40 years I’ve seen actual hydrating rains during the summer- maybe a half dozen times. It is most prudent to proceed as if there will be no rain for three months.

A plants origin dictates when and how you water

Luckily, we have fairly wet springs before our annual summer drought. This leaves residual moisture in the subsoil that plants with deep roots can access for a long time. This distinct dry summer/wet winter climate has much in common with the worlds Mediterranean climates. In fact, ours has been called the coldest Mediterranean climate in the world. More accurately this is known as a modified Mediterranean climate. Therefore, we succeed with plants native to the worlds climates that are similar. Lavender and Rosemary from the actual Mediterranean as well as Cistus and many other plants are at home here. The worlds other Mediterranean climates, Southern Chile, Southern Australia, and South Africa have also yielded some of our most successful genera. It also means that plants from summer rainfall climates require specific attention to irrigation. The Eastern U.S. Europe, China, and Japan all boast summer monsoon conditions. Plants from those regions are often summer water lovers and require supplemental summer moisture here. A side note many summer rainfall plants have some natural drought adaptation in their make up, just enough for well established summer rainfall plants to subsist through our dry summers.

We believe that the most successful, ecologically sound gardens figure into the equation our rainfall patterns, when it is wet and when it is dry. For instance many plants adapted to dry warm summers actually loathe the combination of wet soils and heat. Grevilleas, Manzanitas, Ceanothus, and Cistus all resent these conditions. Summer water must be curtailed. They have no problem with wet soils when it is cool so winter wet is not an issue. The most sustainable way to garden in our climate is to assign zones where you will irrigate or withhold it for plants that want only what falls from the sky. Climate adapted plants fit nicely into all aspects of our landscape and produce gardens with lower resource inputs from the gardener.

An  overview of Portland’s Climate in facts:

Our driest months are July and August (.50″)

Climate adapted plants for gardeners in the PNW