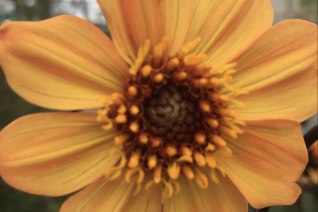 We promised this very tall dahlia that it didn’t have to play basketball. And she agreed to produce a constant supply of amber/blonde single flowers that we love. This is a very old variety for us. In the past 20 years we’ve let our original seed and cutting raised plants dwindle as they are taken out by horrible freezes. What we’ve found is that we lose Dahlias by variety which implies two things. One,  Dahlia’s cold hardiness is different for every cultivar let alone species. And  (two) we’ve let nature do the selecting for us. The varieties that are left are the very cold hardiest Dahlias, and we’ve been very impressed with their performance. Rich soil that is never boggy but is moisture retentive with regular summer irrigation. Full sun and this variety also sports dark foliage which is highlighted by the lighter colored flowers. To 5′ tall sporting long flower stems. Dahlias as best planted in a warm full sun position in our climate where the soil seldom freezes. A thick mulch in fall is added insurance. Our varieties have been reliably hardy down to 5ºF with no issues. If you live in a colder zone you can lift and store the tubers over the winter.  Replant when all danger of frost has past. 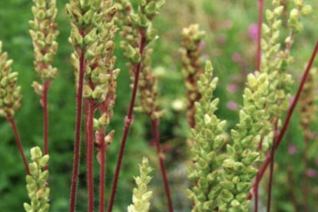 One of our prettiest native Heucheras that can be found in partly shady locations from the Willamette Valley to the Cascades. A low rosette of handsome maple shaped leaves looks good for most of the year. In late spring very vertical straight stems erupt and cruise to 14″ tall. They terminate in rows of green flowers. As the flowers fade and change to seed the erect stems turn a soft red. Blooms are effective for months. A colony forming plant that spreads in rich to average soil with regular summer irrigation. Best in moist shady locations but is amenable to full sun- which will dramatically increase the number of flowers. Climate adapted perennial that improves under cultivation. Mass for a soft green floral effect. Mix with other woodlanders or even in full sun in rock gardens. Semi-deciduous. To 18″ wide. Moderate deer resistance. Excellent plant for partly shady meadows, which is its native haunt. Native to the city limits of Portland.  Excellent plant. Oregon native plant. 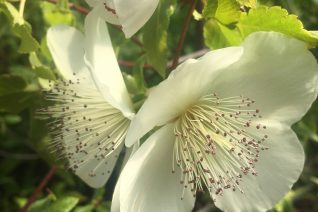 Nirrhe is a handsome shrub/small tree that is native to central and southern Chile in moist woods. A slow growing plant with divided leaves that turn brilliant red in fall before dropping. This is the cold hardiest member of this genus enduring temperatures slightly below 0ºF with no damage. Unfortunately, it can be slow to establish and it requires moisture retentive soil that is high in organic matter. Regular deep summer soaks. Best with a cool root run. Roots in the shade tops in the sun. 2″ cupped 4 petalled pure white flowers erupt over the plant in July/August. The interior of the flowers house a boss of showy stamens tipped with purple pollen. Best with protection from hot afternoon sun. Flowers can fry even in short heatwaves so a cool position is suggested. To 14′ in 10 years and 6′ wide. Establishes faster with richly amended soil. Fall color, though late in the season is often spectacular red/ orange. Very slow to finish in a nursery container and not a fast growing plant over all.  Wonderful surprise when it blooms during our hottest time of the year. 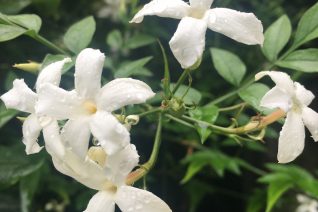 Years ago when I lived in southeast Portland, not far from where our shop is located I noticed a huge, old Poet’s Jasmine that straddled a fence with an 1840’s Bungalow behind it. I’ve always been a big fan of Jasmine so it was in my pervue. Fast forward 20 years and  when we went to check out the lot for our shop that Jasmine was still there. Peeking over the fence. Since then it has become a prime feature in our border and with extra love and water its gotten huge. We’ve grown quite a few cultivars of Poet’s Jasmine and there is one prime difference that makes this an exceptional plant. Unlike most Jasminum officinale which are most fragrant in the evening to morning this selection pumps out perfume 24 hours a day. A hot day at the shop is a wave of sweet jasmine perfume. Vigorous, deciduous hardy vine with a huge flush of bloom beginning in June and extending to August with some spare flowers into autumn. To 15′ tall and spreading. This large twining vine requires space and a strong support. In time the trunk becomes a bare, gnarled corklike texture and is pretty in a rough way. Fall color is a little yellow to very little  Sublime with white fragrant stars raining down for months.Excellent in concert up a pergola with roses. Also, I later found out that our 1840’s bungalow neighbor was the first home owned by Asian Americans on the east side of the Willamette River. I have a strong suspicion that this venerable Jasmine could be VERY old. Classic starry white flowers and fragrance on a tough, long lived vine. Native to central to eastern Asia. Moderate deer resistance. 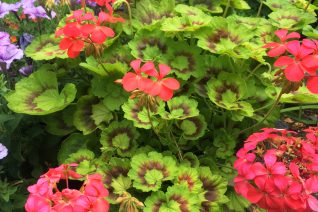 There is something so classic and special about this zonal Geranium. Chartreuse leaves are banded with a darker zone on each leaf. This forms a repeating pattern that is very vivid. Long stems with clusters of neon coral/pink flowers appear continuously from May to frost. This zonal geranium does not just grow up. It spreads laterally in time and a single plant in a container will trail gracefully over the edges. Full sun to very light shade in rich, well drained soil with regular irrigation. This zonal really likes hot conditions and good air circulation. Classic occupying a row of terra cotta pots. Vivid in containers and a very good mixer. Very easy, bright, and satisfying tender perennial. 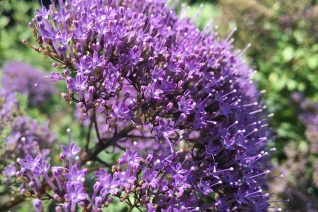 Flossflower- this short lived perennial is a wonderful long blooming plant. Umbels of blue flowers rise to 20″ tall. Remove the first set of blooms and it will sprout vigorously from the sides, rows of flowers. Loved by butterflies and pollinators in general. This Mediterranean native has been raised as a cut flower forever, blooming continues to October if you remove spent flowers. They last in a vase for a week or more and deliver a light, sweet fragrance. Freezes to the ground below 20ºF, and is root hardy to about 10ºF. Typical lifespan for an individual plant is 3-5 years but it almost always guarantees seedlings which will sprout in adventitious places. Full sun to very light shade and rich soil with light consistent summer water. It may go very dry and recover from a deep soak. Very easy to grow plant for spectacular effects. Perennials borders, cutting gardens. Hummingbird manna. Forms arching clumps. A distant relative of Campanulas. Rich soil and regular water guarantees a much larger, bloomier plant that will have a longer lifespan. 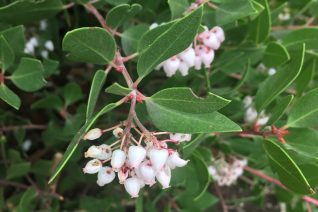 Smaller growing Manzanita that assumes the twisted form of a bonsai with age. In fact this 2′ x 4′ wide decumbent shrub makes a wonderful, long lived container plant. In the ground it excels on slopes and other places where standing water never occurs. Full sun to high overhead shade (a high tree canopy). In late winter scattered smaller white urn shaped flowers decorate the branch tips. They morph into highly prized fruit for wildlife. Sage green  diamond shaped foliage it lightly twisted and terminates to a sharp tip. Twigs, branches, and trunks all have a glossy mahogany finish. Great shrub for covering low slopes. Effectively blocks weeds. Water to establish and then set it free. Several plants may be massed to produce a small scale, drought adapted ground cover.  Exceptionally garden tolerant selection that is exceptionally handsome. This species is native to the central CA coast and has been one of the best for garden culture in our region. Accepts light irrigation in summer. Excellent performance at the Oregon coast. It thrives on sandy soils. Nice smaller growing selection. Naturally summer drought adapted. Orange drupes are showy. 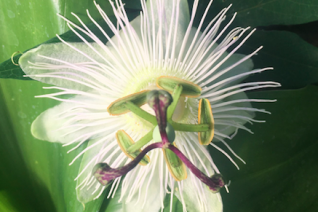 Ravishing pure white intricate flowers flow from this passion vine, which can be rambunctious in the wrong place. Large growing plant to 20′ (long) tall and attaching itself  firmly by tendrils. Full sun in average soil with a lot of water to establish. Once established it is on its own. Too much irrigation and soil that is too rich leads to prodigious growth that can get rank and lack bloom. So, don’t starve it, just put it in reasonably good soil, that you have double dug. Water faithfully to spur growth. Semi-deciduous to evergreen in our climate.In winters below 15ºF and depending on the length of cold it can be totally deciduous. Good performance on the Oregon coast.  5″ wide flowers have a light sweet fragrance. Moderate deer resistance- it can also climb out of reach. Wonderful white passion vine. 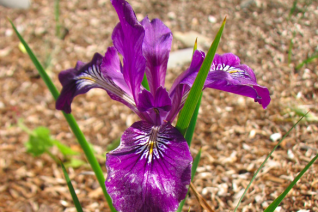 Oregon iris or Tough leaved iris is the most northerly species of Pacifica Iris- extending its native zone as far as SW Washington. Its common throughout the western part of our state where it decorates grassy hillsides in full sun to quite a bit of shade with jolly purple flowers April-June. That was the most common color where I grew up SW of Eugene. Turns out this Iris comes in quite a few colors. Pink, blue, white, golden yellow, red- all hues that have been recorded for this species. Conspicuous also, among the 11 Pacifica species this is a winter deciduous perennial and its the hardiest of the lot. Forms grassy clumps in fan shaped displays to about 10″ tall.  A large clump can be 30″ across and filled with nearly 100 flowers- these rise on cantilevered stems to 14″ tall. Not very tolerant of disturbance and to be honest it has stymied us quite a few times. They HATE division. Therefore, we feature seed grown plants- local seed. These plants feature extra vigor and usually bloom with in 3 years. They also establish better.  Best in light shade, dappled shade on slopes. Average, clay soil is what it wants and you can increase vigor by double digging the hole very wide to incorporate oxygen in the soil and water lightly and consistently through the first summer. Then none to light in subsequent years. And admirable competitor with introduced invasives and as per all Iris it is supremely deer and even rabbit resistant.  Winter deciduous- also, it may go drought deciduous in extremely dry summers. Mixes well with native annuals. Established clumps live for decades. The flowers have the light fragrance of root beer (at least to me) and are the only fragrant Pacifica species that I can detect.  First nation people used the incredibly tough leaves to braid into ropes, traps. Which is cool.  Photo credit: East Multnomah Conservation District. Oregon native plant. 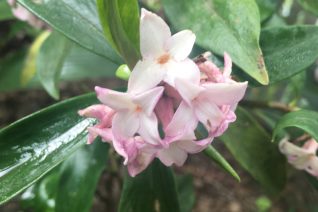 Excellent all green form of Winter Daphne with dark pink buds that open to softer pink insanely fragrant flowers from January to April. One of the larger growing cultivars 4′ x 4′ in 6 years. Excellent in part shade to shade, including dry shade, where it will continue its fabulous bloom. ‘Zuiko Nishiki’ is known for superior cold hardiness as well, taking temperatures to 0ºF with little harm. This is a great cultivar for colder gardens. Moderate rate of growth about 10″ per year. Supremely deer resistant evergreen shrub that will never be bothered. Prune if needed very lightly after blooming has ended. Regular water to establish then very drought tolerant. Loves clay soils that dry in summer. Irrigate only when very dry. This increases the flower bud set for the following year. The sweet lemon fragrance fills the air for months. Somewhat formal appearing plant out of bloom.