The national climate prediction center has shown that a moderate La Nina has formed in the tropical Pacific. That has large implications for our weather this winter. Traditionally, La Nina is best known in our region for wetter, colder winters and there is a greater possibility of an arctic outbreak as well as low elevation snow events.  Its time to prepare your garden for a possible harsh winter, I’ll go into that in a moment, first I’ll explain just what causes La Nina.

La Nina and the Southern Oscillation

La Nina is the cold sister and opposite of El Nino. The Southern Oscillation (ENSO) as its known occurs along the equator in the tropical Pacific. Typically the trade winds blow to the west. This pushes warm surface water to the west and piles it up in the western Pacific. This absence of warm surface waters along the coast of South America  causes an upwelling of cold nutrient rich waters. These fertile waters are great for fishing. In a La Nina year these trade winds ramp up- the product of a years long process that sees the winds increase, remain static or in El Nino years the winds fail entirely- a process that plays out over a 3 to 4 year period.  So, typically La Nina conditions can be expected every 3 to 4 years. Slightly less than El Nino. Its characterized by a 5-9ºF decrease in sea surface temperatures along the equatorial zone. The weather for the entire Pacific basin as well as the worlds weather shifts in response. In the Pacific Northwest La Nina conditions have been in place for some of our all time coldest winters. So, when one is forming my heart rate does increase a little as we go into the winter season. If you are a skier its time to celebrate, if you are a gardener its time to prepare. The good news is that La Ninas can produce prodigious snowpacks ensuring reliable water for summer. Oregon has been experiencing moderate to severe drought. So, increased precipitation will be welcome. 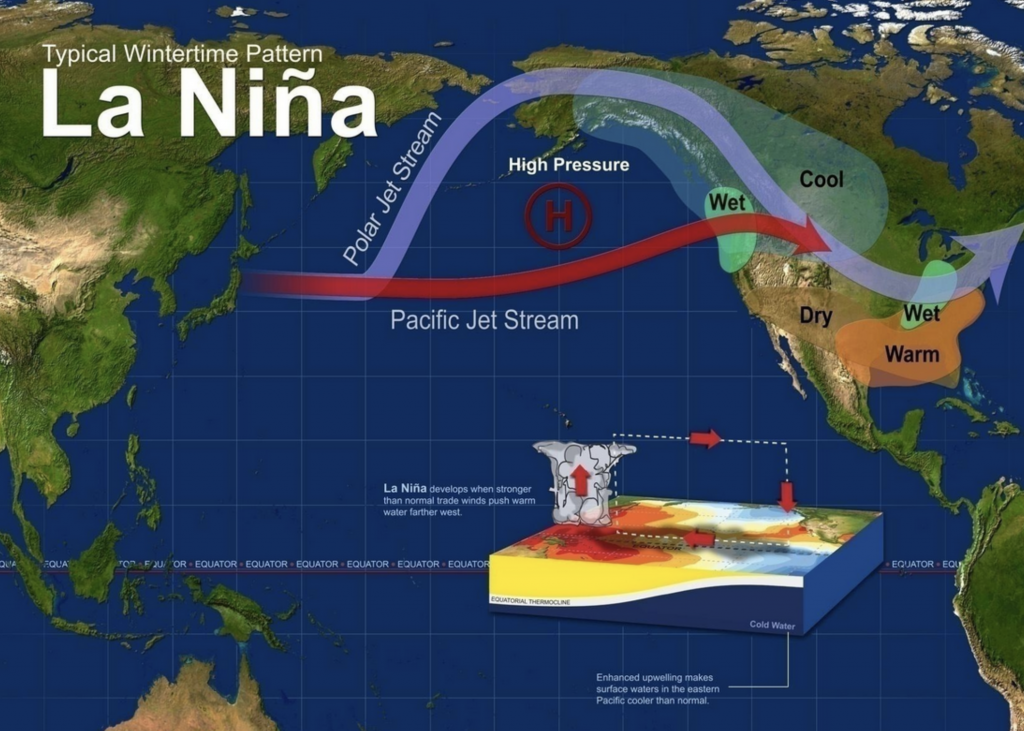 Our last La Nina was three years ago -2016/17.  And it contributed to one of the coldest stretches of weather in  the past 20 years. Who can forget January 2017, six ice/snow events going into February. One snowfall on January 9th that produced locally 12″ of snow in town.  That 12″ is the most snow I’ve had in my garden in the 10 years I’ve lived here in North Portland. It was a typical Columbia Gorge winter. Arctic air continually spilling east of the Cascades with low pressure drawing the cold through the Gorge. The results were repeated bouts of freezing rain and bone chilling subfreezing east wind. The lowest temperature experienced at KPDX was a shocking 11ºF with 3ºF recorded in Hillsboro. (My lowest temperature was 16ºF) At the airport that ties the low for the past 30 years. Other infamous La Nina winters recently are 2010- associated with a devastating early December freeze and 1998 one of the wettest years ever in our region.  The most infamous  La Nina winters include two of our coldest winters of all time. 1964 associated with an intense pre-Christmas freeze that saw the mercury dip to 6ºF at PDX and then the mother of all cold winters 1950 which still holds the record for the all time PDX low of -3ºF. I mention this because analog years compared with current conditions can give us the best impression of what to expect. Not all La Nina winters have been severe, but the vast majority lean in this direction so prudence is recommended.

Personally, I’m interested in how global warming is going to impact the Southern Oscillation. Will warmer temperatures mitigate our coldest possibilities of the past or will a lagging jet stream allow arctic air to bleed south? It remains to be seen. According to NOAA we see average to slightly below average temperatures as well as increased precipitation. Neither is a particularly strong signal and the core of it is on our periphery, but you get the idea.  Here are the temperature prognostications for November, December, and January. 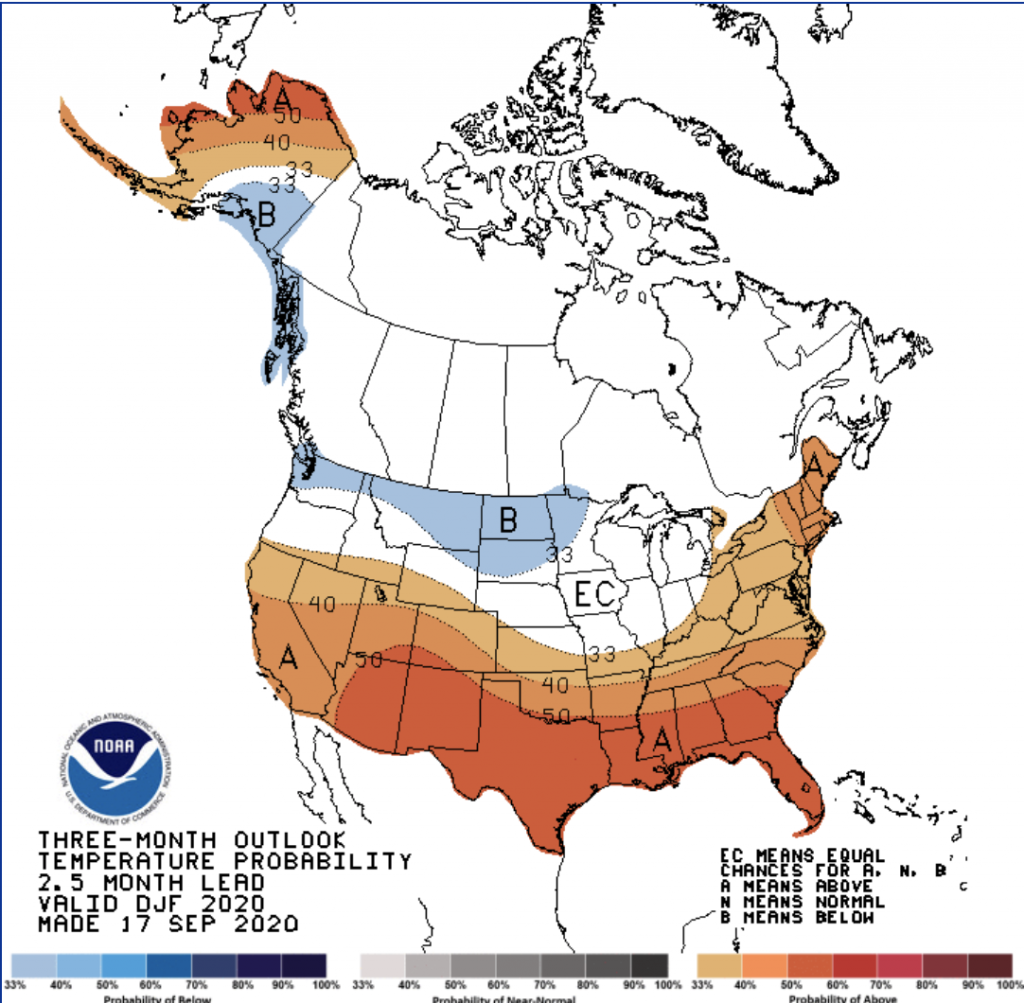 What we really need is rain. The past two rainy seasons have faltered somewhat and parts of the state in combination with the annual summer drought are really hurting. This prolonged period of substandard moisture contributed to the dry fuel load this September that fueled the wildfires in our once in a life time firestorm event.  That means that wood in the forest was ready to burn and wow did it ever. Our precipitation outlook doesn’t look as dire. It reflects the typical wetter weather to the north. 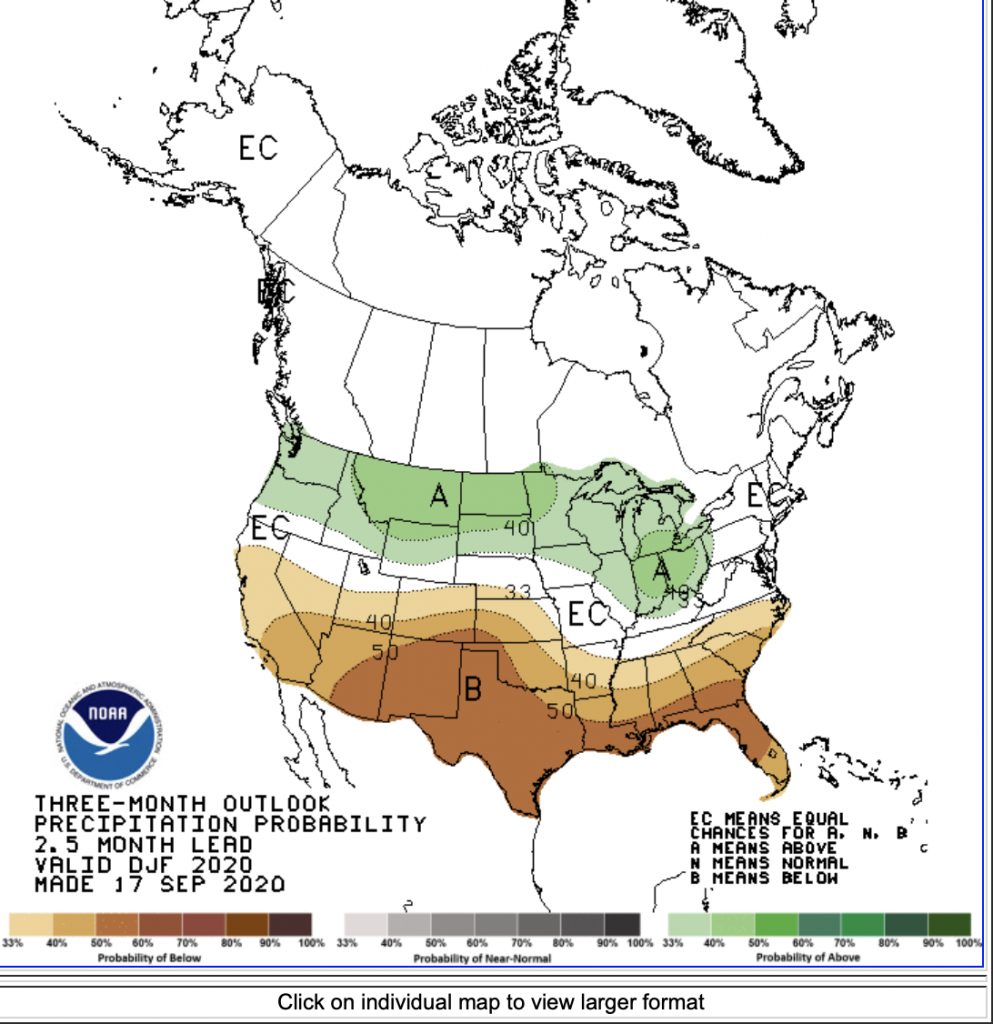 Recent mild winters have distracted us

Last year’s coldest temperature at PDX was a paltry 26ºF. It reminded us that climate change is real. One minor snow fall and winter was over. This year expect much more active weather. One thing that we have not seen in more 13 years is a major windstorm. In the past they appeared about once every 7 years. So, we are very overdue for a windstorm. A major windstorm in Western Oregon is when 4 or more inland stations reports wind gusts over 60 mph. That hasn’t happened since the Hannukah Eve Storm in 2007. I’m referring to major windstorms that come from the S/SW. Our windstorm on Labor day arrived from the east and though very strong it is nothing compared to a full blown Pacific system. So, that is one thing I’m going to be watching for this season. Another is the possibility of an arctic outbreak. That is characterized by three or more days with highs below freezing and three nights with low’s below 20ºF. We haven’t seen a real widespread arctic event since 2013- a very long time in our recent history. So, I’ll keep my eye out for signs of that.

How to prepare for a cold winter in your garden

Its not too early to prepare for cold weather in your garden. Several things that I like to reassure myself are a supply of old sheets and/or remay with tight preferably elastic hooks -remember that when arctic air arrives it comes with a blast of subfreezing wind from the east. I cover borderline hardy plants and plants that have resented subfreezing wind in the past. I also have a roll of fine clear plastic to cover wet/cold sensitives like Agaves. This fall I will collect a bag of dried leaves too and store it in the garage. Nothing is better for mulching tender perennials. If a freeze waits until after christmas another good solution is to take all of the branches off your Xmas tree and hold them as useful protection of tender plants. Plants that have struggled in the past get a large bough placed over the crown. When the freeze is over I simply pile the limbs into the yard debris bucket.

If a large freeze threatens

I will certainly do a blogpost if an arctic event is in our future. NOAA is very good about modeling future cold events. And though snow prediction in our area is very tricky a big blast of arctic air sliding down from Canada is much more conspicuous. I hope that there is no need but I’ll post the forecast and its specific influence on certain plants.

We are still open

We will remain open until at least the second week in November. Then we’ll set up special pick up days for online ordering. Despite the possibility of a cold winter there are still a plethora of hardy plants that appreciate fall and winter planting.

HAVE A WONDERFUL HALLOWEEN AND DON’T FORGET TO VOTE!