Xera Plants shop is open Thursday-Sunday 10 am – 5 pm thru Oct 10. You may also place orders via email for pickup at the shop during open hours. See our home page for our current availability list.

A weak to nearly moderate El Nino formed in the Pacific during the late winter. Its anticipated to last through next winter at least. El Nino or ENSO (El Nino/Southern Oscillation) has profound effects on the weather the world over, including the Pacific Northwest. Normally it causes warmer and drier conditions in our region- (which have been noted) and this event is producing classic effects all over the world.

El Nino/Southern Oscillation is a warming of sea surface temperatures in the equatorial Pacific. Normally the wind patterns at the equator are forced to the east. Off the coasts of Equador and Peru this offshore flow is nearly continuous. This flow forces the surface sea water to be pushed to the west. As a result there is an upwelling of cold water off of the NW South American coast. Cold water holds more oxygen and therefore, nutrients. Fishing is good. Every few years there is a reversal of this flow. As the east winds reverse or cease warm sea surface water sloshes to the east. Sea surface temperatures rise 4ºF-7ºF- warm water holds less oxygen and therefore nutrients. Fishing collapses. Fishermen noticed that this phenomenon usually occurs beginning near Christmas- hence the name El Nino. The child. El Nino affects the entire worlds climate circulation system.  Without going into painful detail some of those effects are drought in Indonesia/Australia, increased cyclones in the tropical Pacific but perhaps the its most dramatic calling card is in North America where the polar jet (the northern jet stream) loses intensity and the subtropical jet becomes energized. As a result there is a reversal of temperature regimes. The northern United States realizes warm and dry conditions and the southern part of the country is much wetter and stormier. See the recent and ongoing flooding concerns in the southern plains. What it means for us is the possibility of yet another above normal summer.

The last strong El Nino occurred in 2015/16 and that event caused the entire global temperature to rise and that is partially responsible for that being the warmest year (2015) reported globally since record keeping began. Since 2010 there has been a pronounced increase in the number of days above 90ºF in western Oregon. Last years record number of days (36) considering our 1980 to 2010 average number of days is just 12 was dramatic. The NOAA has issued its forecast for the next year and as a gardener I am going to pay close attention to watering this year. Here is their outlook for meteorological summer June-August. 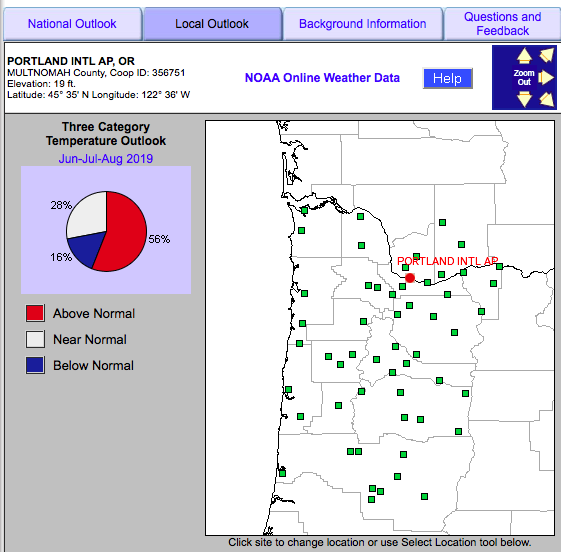 Both the state of Washington and Oregon are reporting portions of moderate drought. Dryness increases dramatically north of the Columbia River. This is not unusual for an El Nino but this years dryness has been exacerbated by below normal precipitation during spring – (The same thing happened last spring- it was already dry going into our annual drought.) Plants that did not receive enough water suffered. So, an El Nino is not at all welcome. Once again I’d advise people to consider mulching this year if you haven’t in the recent past and pay close attention to water loving plants. This includes trees. The mass majority of street trees planted in Portland are from summer rainfall regions. Two dry years in a row is when stressed trees really show it. So if you have a recently planted street tree please water it through summer regularly. Drought stressed trees become weaker- even before conspicuous sign of water stress are evident. This leaves them susceptible to winter windstorms as well as ice/snow damage. So, its important that these trees receive adequate water. In fact its important to check all of your trees in periods of excessive aridity. If the tree is not native to our region its likely its a summer water lover.

Many people think that plants will suffer if installed during hot weather.  There are several reasons why this is a great time to plant. The soil temperatures are high and the air temperature too- plants will instantly grow. This means the plants root system will almost immediately expand and establishment is much faster. Mainly I think people don’t want to plant when its hot because its too hot for them. But if you choose a cool time of day and are very diligent with water and mulch summer is a fantastic time to plant. In fact, one of the most successful gardens I ever installed I planted on a day that was 105ºF-water and mulch were applied and in the heat the plants established incredibly fast.  To plant in dry soil conditions remember to fill the planting hole with water and let it drain at least twice. This wets the soil column below and around the hole. Fill it with water a third time and set the plants rootball in the water and back fill with soil and mulch. Leave a small moat for water to collect and direct it down to the roots. water regularly and bam you have an established plant lickity split. This is how I used to plant in the desert and it works wonders here too. And remember that most plants come directly from a very hot hoop house in summer. Apply plenty of water and you are set.

We will be shipping new plants weekly filling the shop through the summer with new varieties arriving. If you are looking for a specific plant please feel free to email (xeraplants@gmail.com) or give us a call. We will happily put aside plants when they are ready and customers who place holds will get a phone call that week.

Have a wonderful summer- stay cool and don’t spend too much time standing behind a hose. Heh.