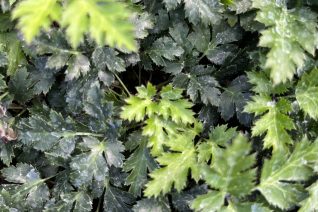 Oregon cut leaf gold thread is a widespread but not common evergreen perennial that is found in dry shade on the west side the Cascades. Native primarily to Oregon it extends north into Washington and is rare south into California.  A colony creating perennial that has handsome, intricate deep green foliage. The arrow shaped leaves are arranged in rosettes along the expanding yellow stolons. The effect is a dense cover that expands at a slow rate. In spring sparse thread like flowers are curious followed by swollen seed pods arranged in a circle. Rich to average soil in shade to dappled shade, though if pushed it can tolerate  a little sun. Good year round appearance. It may be cut back at the end of winter, but I haven’t really found this to be necessary. Use its best attributes, adaptation to dry shade and evergreen good looks as a limited groundcover beneath woodland perennials or at its best on the forest floor. Not a wide scale groundcover and clumps expand at a slow/moderate pace. Not adapted to compacted or clay soils. Best in heavy duff on the forest floor. Great in shade containers at the foot of Aspidistra . Not bothered by deer. Limited quantities. It derives its common name from the bright yellow roots and stolons. Water until you see good new growth then set it free.  Oregon native plant.