Xera Plants shop is open Thursday-Saturday 10:00-5:00.  Not all plants in the catalog are currently in stock -See our home page for our current availability list. 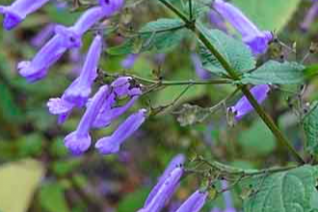 I can’t imagine my garden in autumn now without this crazy late blooming blue, blue blue perennial. To 6 ‘x 6’ long stems terminate in clouds of bright blue guppy shaped flowers beginning in mid-October and continuing usually until the first hard freeze- often mid-December in the city. Part shade in deep rich moisture retentive soil. Kind of a quiet plant until autumn and then holy shit. Clouds of blue guppies people. Clouds of blue guppies. Often it gets yellow fall color simultaneously with this display. Incredible cut flower at a weird time of the year. Regular water all through summer. This plant gets big, big, big. Perfectly hardy to cold way below zero. So happy I found you Rabdosia now Isodon which sounds more like a freaking Dinosaur than a groovy late fall blooming perennial. Give this plant room, it will get much larger than it looks in a nursery pot. It can be nearly tucked behind shrubs or taller late season perennials. It often turns a soft straw color in concert with the blue flowers. Foliage out of flower is somewhat dull but the fall display makes it worth it. Native to Hokkaido, Japan. Formerly known as both isodon and before that Rhabdosia. Seems to have settled into the mostly tender genus Plectranthus. Fabulous late season perennial.