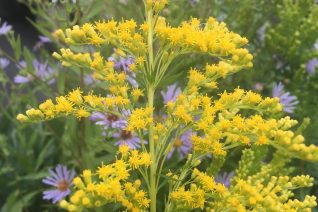 Our own west coast form of Golden Rod which can be found in vernally wet locations or even fence rows. Vigorous, strong growing perennial that erupts in plumes of golden flowers from August to October.  Spreading via runners it can take up quite a bit of space in lush environs. Best to grow it in un-amended soil with light summer water. Full sun to very light shade. Handsome mid-green leaves line nearly woody stems to 32″ tall. Spreads as far as you let it. Sleeps the first year- LEAPS the second and you have been warned. That having been said its a wonderful romping native perennial for late season pollinators. Its very easy to grow and long blooming. I wouldn’t plant a Willamette Valley meadow without this plant. And my, do you get good bugs. VERY good bugs. Lightly fragrant flowers are great in late season arrangements. Best to pair it with a companion that is just as rambunctious- we select Symphyotrichum subspicatum our native Douglas Aster. Not only do they match each other they make a splendid floral complement and bloom simultaneously. And it will triple the amount of pollinators. Foliage can take on orange/yellow tints in late fall. Cut back in early spring. – but fairly self sufficient.  Oregon native plant.