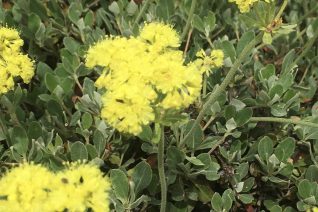 Our native Sulphur Buckwheat that is among the best for general garden culture in our climate. This ubiquitous creeping plant of alpine areas of Oregon celebrates spring with umbels of (sulphur) yellow flowers on long stalks. The low and spreading rosette of leaves are thick green on top with silver indumentum on the reverse. Full sun in fast draining conditions- ideally rock garden conditions because that is where you find it. Crevasses between rocks is where it lives. This is easily reenacted in your garden at the top of a porous rock wall. Blooms May-July for an extended time. The flowers go through a fascinating metamorphosis in color as they open, reach their peak of hot yellow and then turn to russet/red  seed heads. These abandon the spike through autumn and spent flower spikes may be removed in winter. Water until you see the rosettes actively increasing. Then taper to once in a while. This species has a total of 13 (!) subspecies in Oregon alone. We have yet to delve into specific subspecies but if we did I would look for Eriogonum umbellatum var. modocensis and Eriogonum umbellatum var. umbellatum. Both are endemic to Mary’s Peak the tallest point in the Coast Range (4097′). So, I know that those (with immaculate drainage) can easily cope with higher rainfall. Rock garden staple and can also self sow in happy places. Very fun, sunny, satisfying native to grow. Associated plants in habitat are Prunella vulgaris var. lanceolata and Achillea millefolium, Sedum oreganum, Castilleja minuta and Penstemon cardwelii. Excellently adapted to gravel, crevice, gardens with an arid aesthetic. Amend the soil as for Agaves and it will thrive. Pronounced  Air-e-OG-oh-num. Rosettes to 3″ tall, blooming stems to 1′ tall. Spreads, give it room. Oregon native plant. 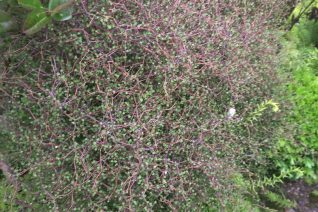 Shrubby Tororaro or Wiggy Wig or more easily- Wire shrub from alpine New Zealand is a fun and fascinating shrub for texture and interest. The fine zig-zagging stems hold onto tiny green mitten shaped leaves. These quietly go away in winter revealing  a cinnamon colored tracery of branches. So dense that you are at a loss to stick your hand through the center. Very dense and rounded in habit for full sun and poor to rich well drained soil Light summer water- though completely drought adapted. From a distance it creates a hazy effect rather than the bulk of a shrub and a wonderful texture all around. Perfectly hardy to cold. To 4′ x 4′ in 5 years. Grows much slower with no water and very fast if you give it a lot. Remember less water less pruning. Tiny off-white flowers spangle the stems in spring and can be followed by translucent white starfish shaped drupes.  A Xera favorite shrub. 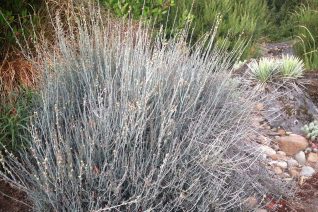 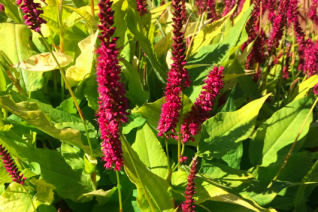 Fantastic new selection of this easy to grow bold perennial. Large foliage is gold/chartreuse and effective from blocks away. In mid-summer to autumn rose red clusters of flowers form congested spikes from the top of the plant. Really really pretty. Vigorous and adaptable to full sun to part shade in rich soil with regular summer moisture. Apply a yearly layer of compost to maintain vigor. To 28′ tall and as wide in a season. Completely winter deciduous. Not prone to seeding like other members of the genus. Tolerates heavy clay soil with regular irrigation. Brilliant perennial.