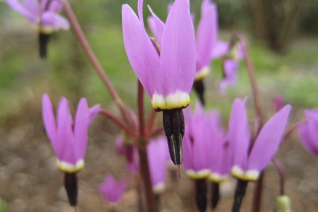 Henderson’s shooting star or more appropriately foothill shooting star. Thats where you see them in meadows and glens usually underneath or near Oregon white oaks. Common composition of the flora seen with this plant are giant baby blue eyes Nemophila m. ‘atomaria’., Ranunculus occidentalis – western buttercup as well as  Lithophragma- Prairie Stars. Rubbery near round leaves emerge in mid winter and persist as rosettes for months until real heat pushes them into sleep. The charming flowers rise up to 14″ on tall straight stems. The nodding flowers gives away its familial association with Cyclamen and Primrose and reflexed magenta purple petals shoot straight up. The interior of the flower is a spike decorated like a single cake with a red brick a brack design  if you look closely. Great cut flower and where ever  you throw the spent flowers they will still ripen and set seed and quickly a new patch will be created. Full sun to part shade in clay soils that dry in summer.  No water once established. They quickly go dormant and disappear to escape summer heat and dry. Relatively easy native wildflower to grow. Deer resistant. Native from northern California north to  SW British Columbia.  Found throughout the western half of the state. This wildflower made extensive colonies around my childhood home near Eugene. It always bloomed around my birthday and over the years I built up huge colonies. It was so charming with Erythronium oreganum- Oregon fawn lily- they grew side by side.  In  our ‘backyard’ there were huge colonies of native Dodecatheon. I would pick bouquets of them from the backyard and when the flowers were spent I would chuck them off the front deck into the woods. Over time I realized they were still setting viable seed as we had a huge population in the front in a few years, .  Blooms late March to early May. Oregon native plant.