Xera Plants shop is open for order pick ups Sat. Oct. 23 & 30 10:00-3:00.  You may place orders via email for pickup at the shop during open hours. See our home page for our current availability list.

Lagerstroemia indica is big on flowers but its also susceptible to powdery mildew among other afflictions (the varieties we grow are resistant). In 1956 a botanist named John Creech located a single specimen of what was to become Lagerstroemia fauriei- Japanese crape myrtle. Its famous for its amazing orange, brown, tan mottled bark and mildew resistance. So, it was incorporated into an existing breeding program by Dr. Egolf  at the National Arboretum to eliminate disease and provide crape myrtles in different sizes. It did but also importantly it imparted the wonderful red/ mahogany bark of this species. Lagerstroemia fauriei has a very limited range on the island of Yakushima in Japan. It has larger leaves, smaller, fragrant white flowers- in of itself a fantastic tree. This is where such hybrids as ‘Natchez’, ‘Osage’, ‘Pecos’ among other get their fantastic colorful bark. A little later a second specimen of Lagerstroemia fauriei was located. It was such a beautiful tree that it was named ‘Kiowa’. Pure orange deep mahogany brown trunks are the hallmark of this second specimen. Only one cultivar was the result of  crossing Lagerstroemia indica with  Lagerstroemia fauriei ‘Kiowa’ to produce this extraordinary cultivar. It was released in 1986. Unfortunately, nursery people didn’t take to it. Dr. Egolf had previously released a LOT of lavender flowered cultivars and this one got overlooked. So good is this tree and with a different genetic makeup than the first fauriei crosses.  Importantly it received that deep  brown  and mottled orange bark as well as fragrant strong lavender flowers. The National Arboretum re-released this tree in 2017 in an effort to redevelop popularity for this extraordinary cultivar. ‘Apalachee; has many outstanding qualities. Its bark is phenomenal, deep glossy brown with orange patches- very striking. The mildew free foliage is dark, lustrous green, and the flowers are sweetly fragrant. Altogether great qualities in an 18′ tall by 8’ wide upright tree. Fall color is a remarkable orange to deep red. This tree has superior flowers to ‘Natchez’  and personally I think the bark is much more showy. Blooms heavily beginning in July. Peaks in a crescendo in August into October. We are very happy to offer this extraordinary tree. Full hot sun in rich soil with regular irrigation for the first several year.  Easy and spectacular multi-dimensional tree. Available in 2022. 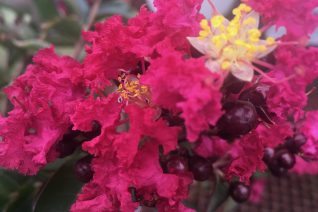 Play it again is another trade name associated with this confusingly named but gorgeous shrubby crape myrtle. We’re very impressed with its performance, the first round of rich, cranberry red flowers appears in July- the color is deep and intense. In this selection no seed is ever formed and the plant will re-bloom continuously on the same flower stem. Watch the spent scape closely new buds seem to bubble out from no where. A compact growing shrub to 4′ x 4′ in 7 years. New foliage is deep wine red and retains the deep intensity of green. The small flower trusses completely obscures the plant in bloom. For the hottest, sunniest position in rich soil with REGULAR summer irrigation. Less over the years. It really does re-bloom continuously. Fall color is vibrant red/ orange. In time the thin stems/trunks exfoliates to a glossy tan sheen. Propagation prohibited. PP#22, 559 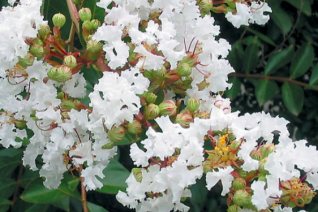 Underused beautiful disease resistant Crape Myrtle that is free blooming with enormous pendulous trusses of pure white flowers. To 15′ tall with a somewhat weeping habit- especially in bloom. It creates a spreading crown on a small easy to grow tree for full, all day sun and regular summer water. The crystal white large flowers appear often as early as late July in hot summers and continues unabated to about the first of October. Fall color is yellow/orange and pretty. The sinuous trunks display taupe/beige glossy bark which is just as showy. Give this wide spreading small tree room to grow. Regular summer water and rich soil yields a growth rate approaching 3′ per year when young. As with almost all Crape trees it grows quickly to its ultimate size and then it slows considerably. Excellent garden tree. National arboretum selection. 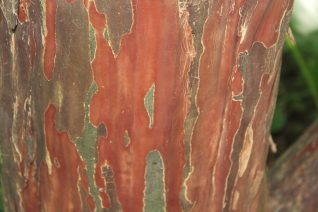 Crape myrtles aren’t just about flowers we actually are even more attracted to the handsome, exfoliating bark. This selection from the disease resistant Japanese species has some of the best bark in the vegetable kingdom. Swaths of muscular mahogany, cinnamon red smooth regions create a fantastic tapestry. This is a very large growing Crape Myrtle with profuse but smaller trusses of FRAGRANT white flowers in mid- late summer. Fall color is bright orange/yellow/red and is very striking in its somewhat brief display. To 35′ tall in great age it grows approximately 3′-4′ per year when young. Bark begins to develop coloration in 2-3 years. Most often multi-trunked this gives the gardener even more beauty to stare at.The most common form of this tree has a single trunk about 1′ tall with profuse multiple branching from there. Its a little odd but in time it forms great canopy that spreads to a dense umbrella shape. Completely disease resistant and because of that this tree first identified in 1956 on the Japanese island of Yakushima  imparts this trait to its hybrid progeny. It also is the source for colorful bark found in many of the National Arboretum hybrids.  Best with consistent summer moisture for the first few years then only occasional deep soaks. Deciduous- fall color is a saturated light orange/gold. A fantastic street tree with great dimensions and form. This selection – chosen for bark coloration can be difficult to locate. Beautiful tree. 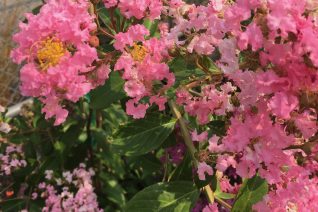 Obscure and exceptional tree type crape myrtle that was one of supreme breeder Donald Egolf’s favorite introductions from the National Arboretum. He introduced 30 Crape myrtles so thats saying a lot. Fast growing upright tree with phenomenal bark. Cinnamon red/mahogany/cream all are present on this 25′ tall arching tree. From late July to October a fantastic display of luminous soft pink flowers born on huge trusses. Fall color is vivid orange/yellow/red. In time it develops a spreading crown and makes a wonderful garden tree. Average to enriched soil with REGULAR summer water for the first few years. Deep soaks on established trees enhances bloom as well. Full, all day sun in a hot position. Excellent tree to garden with- roots are not intrusive and it happily accepts regular irrigation. Grows about 3′-5′ a year when young- slows down to its ultimate height. This is essentially an improved pink flowered form of ‘Natchez’.  Limited quantities. 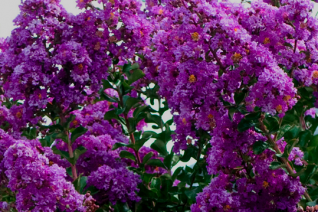 Large growing tree type crape myrtle to 20’+ tall with a wide spreading crown. Reliable soft, luminous purple large trusses of flowers begin on average the first week of August in the city and repeat bloom until October. Fast growing shade tree that can achieve 3′-5′ a year when young in optimal conditions. Free blooming tree that displays glossy, muscular tan trunks when the bark sheds in mid-summer. These contrast greatly with the deep green foliage and sumptuous purple blooms. Long lived, cold hardy, disease resistant cultivar that has shown its merits for many decades in the southern U.S. but less often grown in our region. Fall color is bright red/ orange/ yellow. Mildew resistant- good air circulation- proper cultivation eliminates this threat. As with all purple flowered crape myrtles the flowers can fade a bit after opening. When a non-fading purple crape myrtle becomes available we will be the first to let you know. Otherwise this is a great, dependable, garden tree. Deep, infrequent, summer irrigation. Six or more hours of hot sun per day. Long lived and cold hardy cultivar. 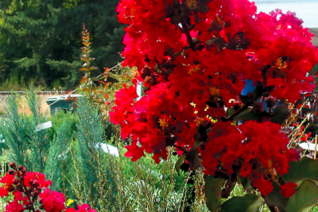 The largest triple hybrid from the National Arboretum has yielded an excellent true red flowered, disease resistant and reliable Crape Myrtle. Fast growing to 20′ tall but just 8′ wide it forms a very upright tree. The huge true red flower trusses (to 8″ long) begin in urban areas in late July and continue unabated for two months. New growth is maroon and still retains hints of that as it changes to green- giving this tree a darker look. We have found that it is slightly tender when young- freezes back in cold winters but it rebounds quickly in summer and established trees see no damage. Rich to average (including heavy clay) soils with regular deep summer irrigation for earlier and more prolific bloom. Bark is fair becoming a mottled patchwork of tan. Fall color is brilliant red. Fast growing- easily 3′-4′ per year in well irrigated trees. Mildew resistant. Full, hot sun in a hot position. 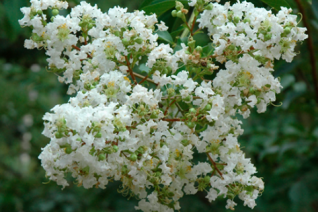 A really good free blooming tree sized crape  myrtle with profuse huge white flower trusses and astonishing orange bark. This is a fast growing tree and if properly irrigated can achieve easily 4′ a year. To 22′ tall and half as wide. Very similar to ‘Natchez’ with several distinct differences. It is a little hardier to cold. For those in cooler rural regions where there is insufficient summer heat to harden the wood for winter this is a good choice. The flowers are primarily held upright as opposed to pendulous on ‘Natchez’, The bark tends more towards pure orange (like a madrone) rather than mottled. Full sun and rich to average soil with regular summer water. Blooms early July to September. Fall color is vivid orange and red. Very nice garden tree and good as a street tree as well. 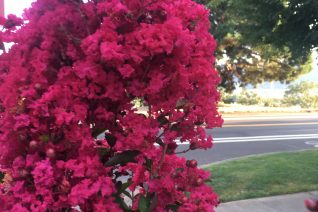 Good looking upright growing very floriferous crape myrtle. The large trusses of flowers born in August – October are a fascinating mix of colors. In cooler weather they are decidedly rose colored, The hotter the weather and the more consistently hot the flower color becomes a rich red. Either way this strong growing disease resistant Crape Myrtle is a winner in our climate. To 18′ tall and 9′ wide in full sun, virtually any soil with REGULAR deep irrigation in summer- without irrigation crape myrtles in our climate will stall and not grow or bloom. Fantastic garden tree. Fall color is red/orange and the bark exfoliates to a muscular soft tan/taupe. Grows 2′-3′ a year when well irrigated. Cold hardy. Not the best picture, but the truest flower color I could capture. Officially marketed as wine colored and thats a fair approximation. Glossy deep black buds erupt into brilliant flowers. Strong vertical habit makes it ideal as a street tree.  Great crape myrtle. 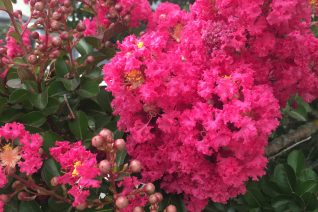 One of the most popular tree type crape myrtles and it is frequently planted as a street tree in the city of Portland. Strongly upright growing tree- almost fastigiate that eventually forms a spreading crown. The silhouette is that of a hot air balloon. Full sun and rich to average soil including clay soils. REGULAR summer water not only ensures a huge flower display in August and September it rapidly speeds the growth rate. Well irrigated trees can put on up to 4′ a year. Otherwise it makes due with little summer water by blooming much later- September. Extremely large hot coral pink trusses are held vertically and are pleasantly fragrant. They can appear the size of a beehive. Less re-bloom than other trees. Fall color is orange/yellow/soft red and lingers. The exfoliating bark takes on a champagne pink glossy sheen when mature. Good garden tree. Excellent street tree. To 22′ tall and 8′ wide at maturity. Water, please water your street trees.