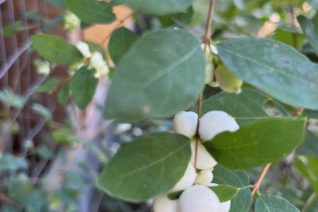 Common snowberry is very widespread in our state and is found in a host of biomes This small, deciduous, suckering shrub begins spring with leaves of the freshest green, so fresh they flutter on the late spring early summer breeze. After several weeks of foliage the small white tinted pink flowers are shaped like small bowls and line the stem at every leaf axil. These morph into plush, plump pure white berries that are quite a bit larger than the relatively insignificant flowers. The berries (drupes) are perched in groups on the stems. Their pure white hue is easy to spot for humans and especially birds.They relish the berries while they are toxic for humans.  To 32″ tall forming a dome shaped suckering shrub twice as wide. Water to establish the first season then none in subsequent years. Mulch heavily.  The berries last well into winter before becoming animal snacks. The gray thin arching stems create a haze on the forest floor that becomes acid green as leaves appear. Spreads by stolons underground to expand its territory. Its adaptable to both upland quite dry situations as well as vernally wet spots in floodplains and fields. In the Willamette Valley its common associates are with Pseudotsuga menziesii (Douglas Fir)  Quercus garryana  ( Oregon White Oak) and Fraxinus latifolia ( Oregon Ash) as an understory component. Its tolerant of dense shade as long as its deciduous to full hot sun, Very well adapted to the driest summers. In summer the acid green leaves change to a dark blue green and are often afflicted by a strain of powdery mildew- my whole life I’ve known this shrub and I’ve never seen powdery mildew cause any permanent damage- mostly its just a poor aesthetic look for late summer to autumn. Fall color is soft yellow and brief. Branches may be carefully cut in berry and will hold them in arrangements for quite a few days. An excellent forage and cover plant for native fauna.  A great native shrub for beginners. This is the taller form of the two species that we grow. Native to the Portland city limits. Moderate deer resistance. One of our best shrubs for seasonally dry shade.  Oregon native plant. 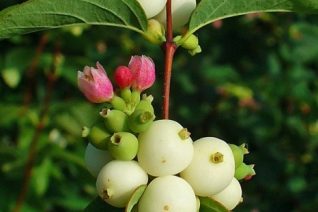 Creeping snowberry is widespread in western Oregon and indeed throughout the state. Its a low suckering deciduous shrub that can occupy large areas. To 30″ tall spread is indefinite in rich to average soil with regular water for the first year to establish. Mulch is extremely beneficial and will suppress weeds for the first few years which can arrive in the middle of a patch of this spreading plant. Leaves are fresh green in spring turning blue green with the heat of summer. Small pinkish flowers occur in late spring and morph over the summer into plush white squishy berries. They line the bare stems and are showy until birds make off with them or they remain and rot. The berries are toxic for humans. Fall color is light yellow to very little. Common on undisturbed slopes on the edges of the valley and in the eastern foothills of the Coast Range and western Cascades. Snow berry is often afflicted with powdery mildew in the driest parts of summer. No harm will come to the plant. A wonderful habitat plant. Oregon native plant.