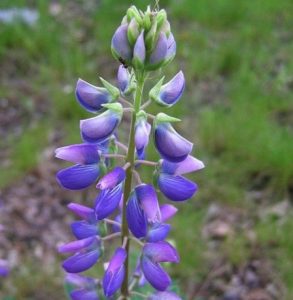 Streambank lupine or Riverbank lupine is widespread shrubby species native to western Oregon. Its full range is from extreme southwest British Columbia (where it is endangered) to northern California. Large growing, spreading plant that can almost achieve a sub shrubby habit. To 3′ tall in bloom forming an evergreen shrublet to 3′ across. From late April to early July spires of blue flowers with a white keel erupt from the plant. Very pretty in bloom and incredibly important to pollinators and insects who feast on the flowers as well as leaves. The true species has flowers that are all blue, its found primarily on sand bars in major rivers on the west side of the state. Most seed that is grown and dispersed is a selected bicolor flower. Short lived plant 3-5 years. Following the flowers conspicuous seed pods turn a dark color, These may be allowed to open and disperse in the OPEN DISTURBED SITES that it craves. Excellent in concert with California poppies where it has become a famous duo on our freeways in the spring. Good cut flower. Not bothered by deer. Water to estalblish then leave it to natural rainfall. Oregon native plant. 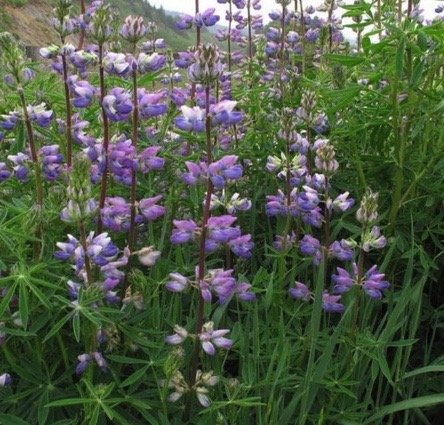