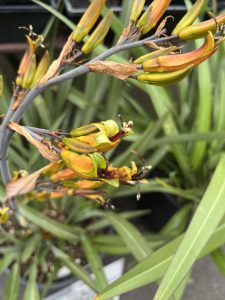 Aka Phormium colensoi, Mountain Flax has a different habit than the more commonly seen and very upright Phormium tenax. This large clump forming plant has wide and DROOPING sea green foliage. It rises to about 4′ tall but spreads at least 7′ in time. Evergreen perennial for borders, containers, This inland species is said to be hardier to cold than P. tenax or its hybrids.. So far we have not observed that. It seems to be the same hardiness about 12ºF but will regrow if frozen to the ground. Rich, well drained, moisture retentive soil is ideal with regular summer irrigation- which spurs establishment and luster. Following mild winters (above 20ºF) 8′ spikes deliver yellow duck beak flowers on a stately and angular inflorescence. If frozen back by temperatures below 17ºF established plants are capable of recovering quickly and entirely by early summer. Excellent performance at the Oregon Coast where it tolerates gale force salty winds and will never be injured by severe cold. Give it a protected spot in the Willamette Valley and shield it from subfreezing wind during arctic events. Very pretty evergreen perennial. High deer resistance. New Zealand mountains. Picture taken on the Oregon Coast.