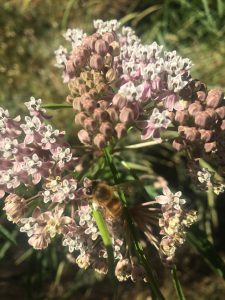 Narrow leaved milkweed is an Oregonian butterfly weed that has a great wildflower demeanor and is just as attractive to pollinators as well as Lepidoptera (butterflies). Full sun and well drained soil, though it accepts clay soil on slopes that are strictly unwatered in summer , otherwise light consistent irrigation to establish- then natural rainfall alone. To 22″ tall and making a spreading plant. Mix with fine textured ornamental grasses,such as Tufted fairy grass – Deschampsia caespitosa and  tall spiky perennials such as simultaneously blooming Kniphofias. Light summer water when companion planted. Flower color is most often creamy white but ranges to light pink. Often seen on road cuts and in ditches in the Willamette Valley. Blends in with grasses and other plants but pollinators find it no matter what. Spreads to form colonies by underground stolons to  2′-3′ wide. Nice cutflower. Important food source for Fendler’s Blue Butterfly which is very endangered and locally indigenous. Winter deciduous. Blooms open in June and persist to August. The large seed heads are pointed and release their downy seeds on the wind in August-September.  Oregon native plant.