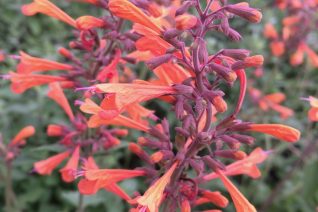 This is our selection of an improved form of the species Agastache auranticus. It has deeper orange flowers on taller stems and exhibits excellent winter/cold/wet hardiness. To 30″ tall, the vivid blooms erupt from June to October. Tightly clump forming perennial whose tall wand-like stems require more horizontal room as well. Hummingbird Mint excels in very well-drained soils with consistent, light summer water. Full sun- you can fudge in light shade and still get results. Remove the previous seasons spent stems in March. Agastache are plants that like oxygen in the soil and they often seed themselves happily between large stones. They appreciate soil that is rich but permeable at all times. We advise to wait until March to remove the previous year’s stem. The hollow stems that remain over winter actually provide oxygen to the roots. If you cut them back too early (Fall, winter) you also leave the new growth at the base unprotected from the elements. So, the stems should remain to both give the plant oxygen and protect the next seasons clump of foliage. Double dig the soil heartily and add a little compost and even pumice if your soil is stingy. Water regularly for the first season to establish a large root system which will require less H20 in subsequent years. This is a vibrant orange that mixes well with deep purples and blues. 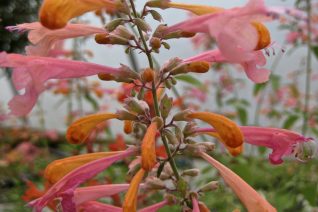 One of our larger growing introductions this is a flowering machine with large individual flowers that open pale orange and senesce to pale pink. Overall this is a pastel flower palette. To 36″ tall and as wide in full sun and well drained soil with light, consistent summer water. Agastaches are excellent as container subjects- they will accept the most cramped roots and still perform. Wait until March to remove the previous years spent stems. Give this guy room. Hummingbird nirvana. Good winter hardiness. 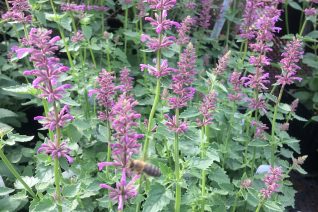 Cute flowering hyssop that makes a clump of strongly vertical stems clad at the tips with soft mauve/purple flowers. A boon to pollinators as well as hummingbirds. Blooms June to October continuously from the same spikes. To 18″ tall and barely half as wide. Agastaches like light soil. Double dig the soil well to incorporate oxygen and apply a handful of all organic fertilizer at planting. This will establish the plant much faster. Excellent performance on slopes where it achieves the drainage that it likes. Middle of the border or massed in a meadow- this easy to grow perennial performs for a long time. Do not cut back until after Valentine’s Day. Consistent water for the first summer then light water in subsequent years. Excellent performance in mixed container plantings. Moderate deer resistance. Foliage is sweetly pungent. 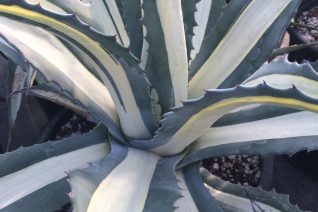 Tender <sigh> but perhaps the most spectacular variegated Agave. It makes a great container plant for LARGE containers. To 5′ x 5′, it grows a little slower in containers. Make sure it’s sturdy and well built too because this puppy has been known to grow so vigorously as to shatter its own home. Use well drained cactus mix and add a handful of all organic fertilizer. Move to a freeze free environment such as an unheated garage if temperatures threaten to drop below 20ºF. Otherwise move it to a dry place for winter- under a south facing eave is ideal. Move it back out in the open when rain dwindles.  Light summer water will speed growth. Leaves on this form are blue on the edges with a dramatic pure white stripe down the center. Wow. 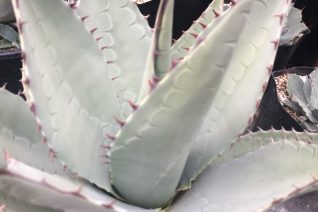 Spikes! A very upright and pokey Agave with steel blue/gray foliage that forms large rosettes. To 3′ across eventually this cold hardy Agave demands excellent drainage but is worth the effort. VERY well drained soil- amend with liberal amounts of pumice and gravel. Excellent on a slope. Plant with the rosette tilted to shed winter water. Makes new pups happily and they will often come up quite a distance from the parent plant. To 3′ tall when up and established. Great in containers that you protect from winter wet. Move to a covered place in fall- a south facing eave is sufficient. Cold hardy below 0ºF- when established. Best to plant in March or April so that it has the longest possible season to develop a tap root going into its first winter. Light summer water to none. High deer resistance. 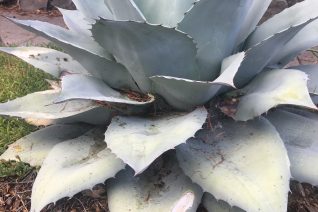 A real winner in our climate this is perhaps among the easiest bold Agaves to cultivate. Large rosettes of flared deadly leaves are a luminous light blue. The whole rosette can achieve 3′ wide and nearly as tall but smaller is more common. Excellent tolerance of the combination of cold and wet that Agaves mostly despise. This plant also is less prone to injury from necrosis of damage- slugs, snails etc. Full sun to a surprising amount of shade, though you’ll want to avoid the overhead detritus of trees into the rosette. In full sun such as a bare parking strip it revels in heat, exposure and fast drainage. Amend the soil to at least 1/2 pumice and 1/2 virgin native soil. Water to establish then only what falls from the sky. Obviously site away from paths- stab wounds suck, literally. In Mexico they planted large agaves in front of the bedroom windows of their female children. The idea I guess was to deter suitors with bad intentions. But its a neat story and you could see how it would work. Obvious awesome deer resistance. Sometimes called Whale Tongue Agave. 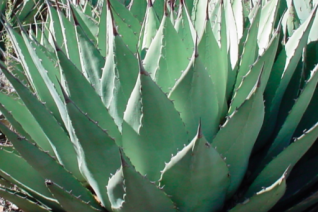 From the very far north end of this variable species range in Northern Arizona near—‘Flagstaff’. High elevation form that is found above 7000′ in the wild. Very cold hardy moderately large Agave. Full sun and very well drained soil. You must amend the soil with pumice and gravel to avoid wet accumulating around the crown in winter. This is made all the more easy by placing on a slope. The rosettes should be tilted to shed winter wet. Very stiff and sharply tipped steel blue leaves form a rosette that is at first upright then spreads out a little. Remove leaves from deciduous plants that collect in the rosette in autumn- they blow in from god knows where and leaving them can encourage rot. Excellent in containers. Move containerized plants under an eave or overhang to keep it dry in winter. No water required after initial establishment. Beautiful form of this cold hardy species. High deer resistance. 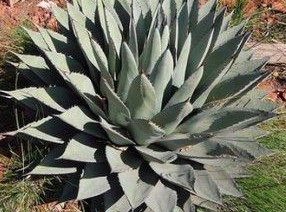 A really pretty pale blue Agave with sharp angular leaves in a remarkably symmetrical rosette with age. Cold hardy and it requires very well drained soil in a hot position. A south facing slope is ideal in soil that has been amended with liberal amounts of pumice and gravel. And you should tilt the rosette so that water does not collect in winter. This variety is a little slower than others. Aside from perfect drainage it requires a little bit of heat and patience. To 20″ tall by 30″ wide in time. Great container subject- make sure the container is sturdy and large enough to accommodate both a spreading primary rosette and prolific pups which crowd the base. In time it can form bold colonies. Move containerized plants to a dry location in winter. Remove deciduous tree leaves that collect in the rosette in autumn to stave off rot. SW U.S. High deer resistance. 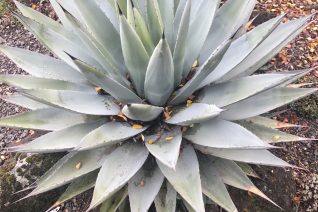 New Mexico Agave is a spike wonder. Much more upright-growing than the species with sharp-tipped leaves that terminate in a blood red thorn. OW. Forms a very symmetrical plant with many leaves of steel blue. Full sun and VERY WELL-DRAINED soil. Excellent on hot slopes where it will tilt the rosette to avoid winter wet. Pups, heh, freely and you will soon have many rosettes. Amend the soil with pumice and gravel. Make sure there is plenty of air in the soil and no place where water could collect. Fantastic specimen plant for a dry garden/gravel garden. Water through the first summer to establish then none in subsequent years. Clean out the rosette when deciduous leaves collect in there- a shop vac works great. The leaves will cause rot when they decompose….so they must go. Great in containers- large, sturdy containers. Cold hardy. High deer resistance. 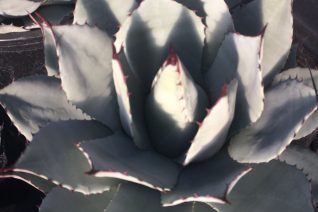 Consistently one of the most successful Agaves for gardens in our region. Soft gray rosettes have leaves with a distinct upright habit. At the tips of the wide leaves is a single (deadly) black thorn. Very nice. Full sun and very well drained soil with little to no summer water when established. This Agave requires soil that is never soggy- amend heavily with pumice and gravel to create air pockets. Plant this (and all) hardy Agaves in our climate on a tilt. The tilted rosette sheds rainwater and it keeps it much drier in winter. Ideally, this Agave should be sited on a hot, south facing slope. In autumn deciduous leaves from (everywhere) seem to blow into the rosette and collect. You must remove these immediately so that they do not rot the center of the plant. A shop vac works wonders…so do bar-B-Q tongs. Excellent in containers. Its best to plant hardy Agaves in early spring to early summer. They require a long season to develop a tap root which in turn ensures that they are cold hardy. No tap root and not so hardy. Hardy below 0ºF when dry. Highly deer resistant.